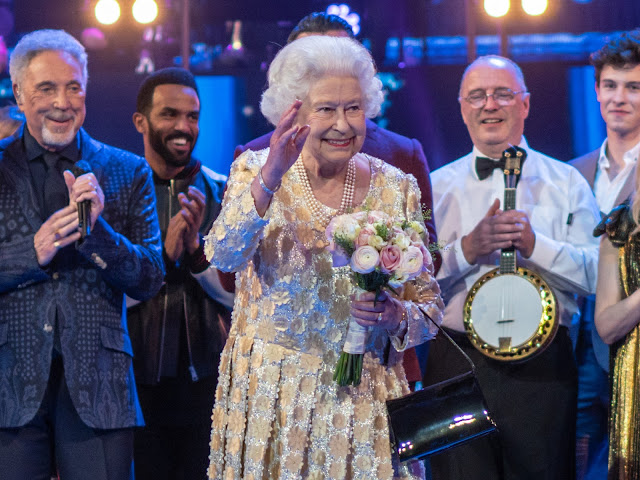 January is always a low key month for the Queen. She stays at Sandringham throughout the month and we mostly get to see her as she heads out to church. But while the public appearances have been as restrained as usual, Elizabeth II has found herself hovering close to the headlines in what's proved to be a busy month for the monarch.


The Queen's first public appearance of the New Year came on Sunday January 6th when she headed to church with William and Kate also attending. So far, so very usual.


A quick photo of Kate because you do actually want to know what she was wearing even if you're pretending to scroll straight on.


This was the Queen's first public appearance since the car crash involving Prince Philip near to the Sandringham Estate put the Royal Family in the spotlight. Initial concerns for his health had quickly been replaced by anger as it became clear that the 97 year old Duke of Edinburgh hadn't been wearing a seatbelt while the occupants of the other car had included a ten month old baby. When Philip was seen out driving without a seatbelt just days later, a PR disaster ensued.


The Queen, accompanied on this church outing by the Duke of York, kept smiling.

The Queen has taken part in a live game of the TV show Pointless at the Sandringham branch of the Women's Institute.

It was hosted by Alexander Armstrong and Her Majesty was on the winning team! #HeartNews pic.twitter.com/owDFyfqJHZ
— East Anglia News (@HeartAngliaNews) January 25, 2019


The other January staple of the Queen's diary is a visit to a local Women's Institute. This time round she popped into the Sandringham branch where she met members, played Pointless (with the actual, real Alexander Armstrong but then this is the Queen we're talking about) and, oh yes, appeared to tell everyone to get on with Brexit. HM urged the country to ''find common ground'' and if the whole mess ends up being sorted out because of jam, Jerusalem and the most experienced Head of State in the world then it's not really that bad a month after all.

at January 31, 2019
Email ThisBlogThis!Share to TwitterShare to FacebookShare to Pinterest
Labels: Queen and Family, Windsor News