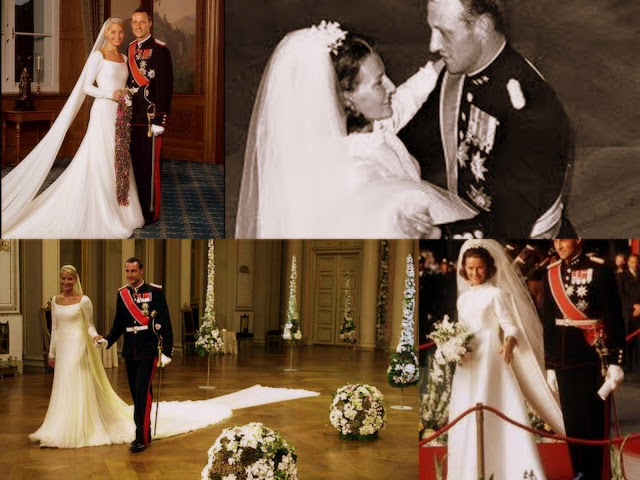 August might be a popular time for brides across Europe but for royal brides, it's not that hot a date. What with all those regal relatives heading off to their summer palaces for a bit of a break, getting all the royal guests in one place for an August wedding can be hard work. But in one country, they don't let that get in their way of holding a royal wedding. Norway loves an August marriage and in the last fifty years, it's given us two of the continent's biggest royal weddings in that month. Here's a look back at two royal August brides....

This was a controversial royal wedding at the time but it's produced one of the most successful regal partnerships of the last century. When Harald, then Crown Prince of Norway, fell in love with a merchant's daughter called Sonja Haraldsen there were more than a few raised eyebrows. Harald, the only person in Norway with succession rights to his country's throne, was supposed to marry royalty and his declaration that he'd remain single rather than wed anyone other than Sonja put his monarchy in a tricky situation. No marriage meant no heirs which meant a constitutional crisis. Harald got his way and as a sign of the royal approval his match had won, his father King Olav walked the bride to the altar of Oslo Domkirke on Augus 29th 1968 - her own father had passed away nine years earlier. Harald and Sonja have been notoriously happy and hugely successful - just after their silver jubilee in January 2016, they had approval ratings of 90%. The couple went on to have two children and now have a whole bevy of grandchildren to keep them busy. This is one love match that has lasted and then some.

Another August wedding in Oslo, another controversial love match. Harald and Sonja's son, Haakon Magnus, followed in his parents' footsteps by causing all kinds of debate with his choice of partner. The Crown Prince fell in love with Mette-Marit Tjessem Hjoiby who already had a son from a previous relationship and who had been involved in a party set that raised eyebrows. Haakon held firm and his parents backed him with the resulting royal wedding, the first major match of the 21st century, turning into a regal celebration like no other. There was a glittering guest list, a very loved up bride and groom and one of the best royal wedding dresses ever. No one was surprised when Haakon and Mette-Marit turned into a super romantic married pair. Seventeen years and two more children on, they're still starry eyed about one another. Norway's August royal brides are winners all the way.