A muted start to 2014 for Europe's royals

Several queen consorts and a couple of queens in waiting have been out and about over the last few days and whether it's the cold, January weather or the slight let down everyone feels after the Christmas holidays, all of them have been rather muted in their appearance.  Queen Maxima of the Netherlands was very low key for her first appearance as consort at the Royal Family's annual New Year receptions, held on January 14th and 15th choosing a beige/ peach colour for both events. 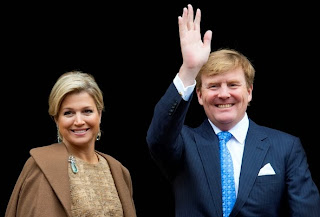 Also keeping it pale and almost interesting in beige was Crown Princess Mary of Denmark who spent January 15th 2014 handing out grants at Royal Copenhagen in a very formal black pencil skirt with a beige print blouse.

Queen Sofia of Spain and Princess Letizia almost faded into the tapestries on January 14th when they presented awards at the Zarzeula Palace in pastels so pale they were in danger of disappearing.

Only Queen Mathilde of the Belgians is trying to ward off the winter whites with a big dose of colour.  For the second New Year reception of the year she went fuschia pink - although she'd chosen dove grey for her first outing.  It's a little splash of colour in the middle of a long, cold month.

at January 15, 2014
Email ThisBlogThis!Share to TwitterShare to FacebookShare to Pinterest
Labels: Letizia, Mathilde of the Belgians, Maxima of the Netherlands, Princess Mary of Denmark.