If the queenship of Isabella of France had ended in January 1314 then history would remember her in a very different light.  The consort of Edward II was, seven hundred years ago, a wronged wife who was doing her best to be loyal to a husband who showed no signs of wanting to be married to her. And all the while keeping the peace between her new royal household and the one she had left behind in Paris as the threat of war between England and France bubbled away in the background.  She had presented her husband with one son and heir and would go on to give him a spare as well as two daughters.  The Isabella who was Queen of England in 1314 is very different from the one in the history books. 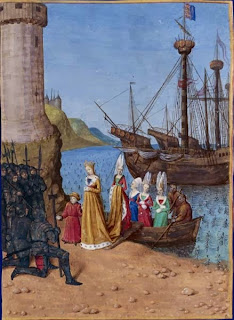 Isabella of France, Queen of England in one of the more familiar images of her from history - the fierce royal who helped depose her husband.  In 1314, she was still finding her feet as a consort and was seen by many as a peacemaker between her king, Edward II, and her father, Philip IV of France

In 1314, the Queen of England was beginning to take a deeper interest in politics but to all intents and purposes seemed to have forgotten, at least in public, the relationship between her husband and his favourite, Piers Gaveston, who had been executed in 1312.  After a successful visit to Paris in 1313 where relations between the French and English courts seemed to have improved, Isabella looked to be in her strongest positon yet as 1314 dawned.  And yet before the end of the year, her husband had suffered a crushing defeat against the Scots at the Battle of Bannockburn while her French family was in disarray after the accusations of adultery against her three sisters-in-law, known as the Tour de Nesle affair, led to two of them being imprisoned.  Isabella went from the beginnings of stability to the most unstable court she had known in the space of twelve months.  And that is perhaps what formed the iron strong will and personality that came to dominate her later years as queen consort and led to her being labelled the 'She-Wolf'.

Isabella, the She-Wolf of France is one of England's most notorious queens

at January 14, 2014
Email ThisBlogThis!Share to TwitterShare to FacebookShare to Pinterest
Labels: Bannockburn, Battle of Bannockburn., Edward II, Isabella of France, the She-Wolf of France