Their Majesties of a century gone

In his New Year's Eve speech, King Harald of Norway spoke about his grandfather, Haakon, the first king of modern Norway and his work on the country's constitution which has given the country ongoing freedom and stability.  In one hundred years, the crown of his country has only moved on two generations but that piece of paper that the first Norwegian king worked on still stands strong, despite many threats in that century.  It shows the transience of kingship and the permanence of the society in which it now sits.  Which is perhaps precisely what Haakon of Norway wanted to achieve.

King Harald of Norway, flanked by Queen Sonia and Crown Prince Haakon Magnus, at the state opening of the Norwegian parliament in 2013.  His New Year message focused on the role of his country's constitution in bringing stability to Norway

Most of Europe's monarchs are just two generations on from those who ruled a century ago.  Elizabeth II of Great Britain is the granddaughter of the man who wore the crown in 1914.  George V was never meant to be king, just as Elizabeth was never meant to be queen.  He had been the second son of the heir of Queen Victoria who only became an heir when his older brother, Albert Victor, died in 1892 at the age of 27. But his devotion to the duty placed upon him became legendary and his interest in constitutional matters and the peaceful settling of issues that affected his whole kingdom - and the wider Empire as it then was - occupied him far more than it had any monarch for centuries.  In many ways, Elizabeth II is very similar to the grandfather she eventually followed on the throne. 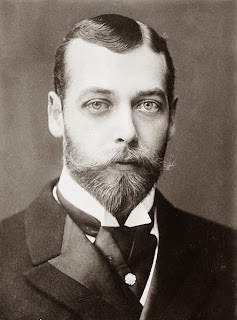 George V was king of Great Britain in 1914 - this photograph shows him in 1893, about a year after he became the heir of his father, the future Edward VII

Another monarch of 1914 was also deeply interested in the development of constitutional powers in the hands of a democratically elected parliament but unlike George V, King Gustaf V of Sweden saw much of his power as a monarch taken away during his long reign.  That process, arguably, began in 1914 when the approach of World War One led to the king exercising his powers and placing his own preferred candidate as Prime Minister, Hjalmar Hammarskjold, at the head of the government until 1918.  But the reaction to this and Gustaf's subsequent acceptance of the government chosen by his people at the end of World War One led to the Swedish monarchy losing many of its powers.  Gustaf V oversaw a massive period of social change, including votes for women, but his role in World War Two is still the issue of hot debate.  His great grandson, Carl XVI Gustaf, now holds the throne of Sweden and has his own place in democratic history as he has overseen the creation of a new constitution for the country which officially abolished all the monarchy's prerogatives.

King Gustaf V of Sweden in the centre of an historic photograph of the three Scandinavian kings of 1914.   Haakon VII of Norway is on the left and Christian X of Denmark on the right.  They met in Malmo in December 1914

The man who ruled Denmark in 1914 had a slightly more topsy turvy relationship with the idea of the changing nature of monarchical powers in the early 20th century.  Christian X had only become king of Denmark in 1912 but by the beginning of World War One he had shown that he was determined to hang on to the considerable influence his country's laws gave him.  But after his decision to install his preferred cabinet caused widespread criticism and fears for the future of Europe's oldest monarchy became very real, Christian backed down and allowed the democratically elected representatives to take power.  His relationship with his people in World War Two changed his image forever and played a large part in his becoming one of the most popular Danish monarchs of all.  He became a symbol for resistance to Nazism and later revelations that he had funded the escape of many Jewish citizens saw the man who had started as authoritarian turn into an image for modern democracy.  The reign of his granddaughter, Margrethe II, which stated in 1972 has only exercised nominal powers and had focused on integrating the royal family fully into the social and cultural lives of Denmark. 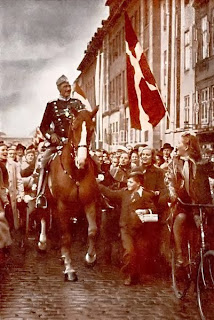 King Christian X of Denmark rode, every day, through the streets of Copenhagen following the arrival of Nazis at the start of World War Two.  His appearances were hugely popular and became a sign of Danish nationality

In contrast, the attitude towards democracy shown by the Spanish king of 1914 and the man who sits on his throne a century later is very different.  Alfonso XIII had become monarch of Spain at the moment of his birth - his mother, Maria Christina, had been about three months pregnant when his father, Alfonso XII, died at the age of 27 in 1885.  His rule was marked by instability and dictatorship under the premiership of Miguel Primo de Rivera.  His decision to flee the country in 1931 as the Second Republic began left the monarchy in limbo and his decision to abdicate in favour of his only son with any remaining dynastic rights, Juan of Barcelona, in 1941 was a futile gesture as the family was in exile and Franco was all but in control of Spain which had been left devastated after the Civil War which had formally ended in 1939.  In contrast, his grandson, Juan Carlos I, inherited a dictatorship from Franco but quickly set about restoring democracy and is widely credited with playing a large role in bringing his country back to modern style government.  But, like his grandfather, he sees his throne rocked by criticisms.  And, like the grandfather he never knew, he has a love of football - Alfonso was responsible for several football clubs acquiring the tag 'Real' or royal in the early part of the 20th century.

Alfonso XIII, King of Spain, ruled his country from birth but fled into exile and eventually abdicated after years of dictatorial government led to revolts.  His grandson, Juan Carlos I, is widely credited with a large role in restoring democracy to Spain in the 1970s but sees his throne under criticism too but for very different reasons


The current king of the Netherlands is the great grandson of the monarch who ruled his country in 1914.  Queen Wilhelmina had been on her country's throne since 1890 and had already established a role which allowed her to express her opinions while her government continued with democratic rule.  A century ago, the monarch of the Netherlands was a free spirited, independent woman with an eye for money who eventually turned herself into a billionaire.   Her throne was perhaps the most stable in Europe, even if there were concerns that her small family - after several miscarriages, the queen had just one daughter to succeed her - might lead to absorption of the kingdom into the then German empire.  The end of that empire in the First World War and the continuing strong presence of Wilhelmina allowed the monarchy to develop into a deep rooted presence with a defined image of itself in the constitutional set up of the Netherlands.  A century on, a great grandson bearing the male version of her name has just begun his rule and in the eight months since Willem-Alexander became king, he has shown plenty of determination and strong presence of his own.

Wilhelmina was the Netherlands' first queen regnant and by 1914 she had established the pattern of her rule and also saw the succession guaranteed in her only child, Juliana, seen here with her mother

In Belgium, the king of a century ago had only been on the throne for five years but had already done a huge amount to improve the image of the still young Belgian monarchy which had taken several knocks during the reign of his father, Leopold II.  By 1914, Albert was already well into a programme of reforms in how the Belgian Congo was run but it was his image as a family man who, along with his wife, enjoyed a simple life not that dissimilar from many well off Belgians that really cemented his popularity.  The family's famously courageous actions during World War One cemented Albert I as a much loved monarch.  His great grandson, Philippe, occupies the throne of the Belgians a century on and five months into his reign is still establishing the nature of his rule.

Albert I, King of the Belgians, was already a popular monarch in 1914 but his conduct in World War One would turn him into a national hero

Another Albert was enacting changes to the constitution of his nation in the south of Europe.  Albert I had become the sovereign prince of Monaco in 1889 and by 1914 had brought the country its first constitution even though it changed not that much at all about the way the country was governed.  One hundred years one, his is the only country with a sovereign of the same name on its throne.  And the two men share one thing - complicated romantic histories - with the first Albert marrying twice while the second Albert has admitted to illegitimate children born before his own marriage to Charlene Wittstock in 2011. 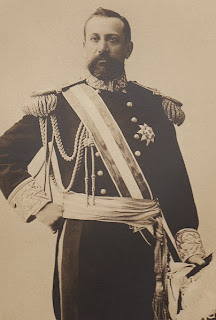 Albert I, sovereign prince of Monaco, brought in a constitution but was as well known for his complicated romantic life

Of course, there are many thrones that existed in 1914 which no longer rule today.  But those that survive all share a deeper involvement in the establishment of constitutional democracy and an erosion of monarchical powers - their ability to adapt to changing times is perhaps the main reason they all still exist.