Birth of a Queen: Alexandra of Denmark 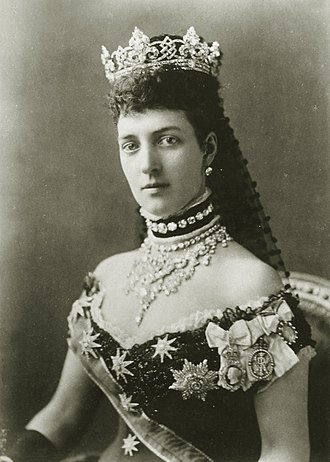 Alexandra, Queen of England, was born on December 1st 1844

Daughter to an unexpected king, daughter in law of an unexpected queen, wife to a merry monarch and mother to a regnant and consort, Alexandra of Denmark's calm gaze belies the impact she had on modern royal history. Her royal story began on December 1st 1844 and, 175 years later, it continues to unfold.

For years, Alexandra was seen as the shy and put upon consort of Edward VII, a man as famous for his philanderings as for his princely pursuits. However, seen through modern eyes, this Queen of England takes her rightful place as a major influence on the generation that would go on to build the House of Windsor.

Alexandra Caroline Marie Charlotte Louise Julia was born on December 1st 1844 at the Yellow Palace in Copenhagen, the eldest daughter of Prince Christian of Schleswig-Holstein-Sonderburg-Glucksburg and his wife, Louise of Hesse-Kassel. In 1853, her father was named as heir to the throne of Denmark after a succession crisis and Alexandra became the daughter of a king in waiting. However, the family was always relatively poor and her childhood was what modern royals might aspire to in their search for a ''normal'' life - Alexandra made her own clothes and rarely attended court.

However, that didn't stop her being of huge interest on the monarchical marriage market as her family's star began to rise. Queen Victoria was in need of a bride for her first born son, Albert Edward, who had already shown a keen interest in pursuing unsuitable women. His older sister, Victoria, decided 'Alix' would be a rather useful royal wife and once her mother agreed, wheels were set in motion. The Prince of Wales proposed to the Danish princess at the home of his uncle, King Leopold of the Belgians, and so began a path that would transform Alexandra into a queen.

Her wedding day itself was pretty miserable as Queen Victoria had just been widowed and the presence of the late Prince Albert hung, quite literally, over the day with the couple even posing for a wedding photo next to a bust of the lost father of the groom. Alexandra soon began producing the prodigious family expected of a queen in waiting - two sons and three daughters would survive to adulthood although sadly her youngest child, Prince Alexander, died within hours of his birth.

Alexandra was known for her charitable work, her love of fashion and her ability to turn a blind eye to her husband's many affairs. And while that poor, to be pitied princess became the usual version of her story in parts of the past century, in reality, Alexandra was far more of a force to be reckoned with.

For a start, two of her children ended up crowned. Her second son, George V, became king on the death of his father. Her youngest daughter, Maud, was converted into Queen of Norway in 1905 when her husband was chosen as the country's new monarch, partly because of the blue blood and regal connections his wife brought with him. But Alexandra didn't just give birth to royals who happened to do well for themselves. She was a nurturing, devoted mother who had much say on how her children were raised. All of those who lived to adulthood were confident, decisive and ambitious people whose apparent shyness hid real depth. The hand that rocked their cradles had all the ability it took to rule the world.

So on this, the 175th anniversary of her birth, let's remember Alexandra as something more than just a put upon wife. Her ability to ignore her husband's infidelities was more than just her lot in life. It was a rather pragmatic stroke of strategy. None of her prince's lovers ever gained the influence that other royal mistresses had done in the past. Ultimately, Alexandra ruled her home and it was her voice that can be heard down the generations. Quietly determined, she became a formidable queen whose influence is still felt today.