The prince who conquered Copenhagen 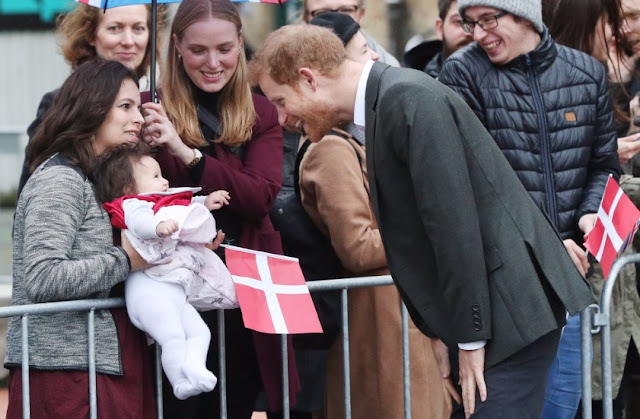 He's the prince with the magic touch right now. Prince Harry took about thirty seconds to charm Copenhagen as he arrived in the Danish capital for a two day visit. The trip, at the request of the Foreign Office, isn't a State Visit but it had all the hallmarks of one. On what could well be his last major appearance before a certain announcement is made, here's how Harry conquered Copenhagen.

It all started in the grandest possible manner as the prince who can't help being charming was given a welcome by the Queen of Denmark. Yep, Margrethe put the real royal stamp of approval on this meeting by throwing open the doors of the Amalienborg Palace to start Harry's trip off in style.

They looked like they got on marvellously - not really that much of a surprise being as both are known for their strong personalities and ability to laugh at life.  After a private audience with the Danish monarch, Harry headed off for a packed day of engagements. But let's just stop and appreciate the fact that the fifth in line to the British throne was given such a very regal welcome. Like we said, all rather State Visit.

And that feel continued as Harry arrived at KPH Copenhagen which supports start ups and social innovation. Harry met local entrepreneurs as well as getting a briefing on the project from its CEO. The prince found out about several businesses supported by KPH which looks after start ups until they are ready to hit the big brave world of business all by themselves. A focus on business and improving society. Yep, that's got the State Visit vibe, too.

Sports are led by playmakers like these here who receive training, gain leadership skills and act as role models to other children pic.twitter.com/RhFWFLpgId
— Kensington Palace (@KensingtonRoyal) October 25, 2017

From there it was on to Game Denmark which was set up in 2002 and which uses street sport as a tool for social change.  You know what that means - here comes Harry on a sports court. OK, this time round he restrained himself and kept it to watching as playmakers, who learn the skills they need to inspire other children by leading sports at the organisation.


Prince Harry says hello to people gathered outside on the way to his next engagement. #RoyalVisitDenmark🇩🇰 pic.twitter.com/nFDOVzZrYF
— Kensington Palace (@KensingtonRoyal) October 25, 2017

Let's not forget the walkabouts. In between engagements, Harry was more than keen to head over to the people who had come along to see him for a chat. Cue flowers, smiles and giggling babies. Yep, Harry was getting broody again. Anyone would think the man was on the brink of getting married or something.


Just when you'd started to forget those shadows of a State Visit, along comes Harry at the Tivoli Gardens for a reception hosted by the UK ambassador to Denmark. The guest list featured leading members of Danish society all talking the talk with a very smiley prince who even tried out a little of his host's language before thanking them for their warm welcome and talking about the ''unbreakable bond'' between the two countries.

That bond looks to have gotten a whole lot stronger as Harry does his thing in Copenhagen. We've got another day to look forward to tomorrow as this prince continues to conquer Copenhagen.