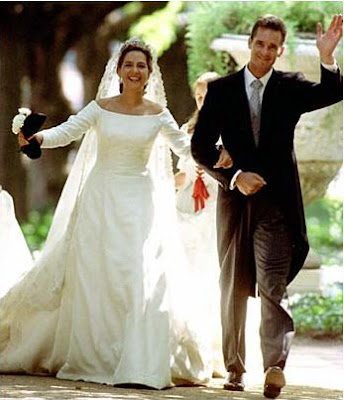 It was a glittering wedding that seemed to put the seal on what then seemed a triumph of a monarchy. Spain's Royal Family was about as popular as could be in October 1997 and the huge outpouring of public support as Infanta Cristina wed Inaki Urdangarin in Barcelona only underlined that. What a difference two decades can make. As Spain's royals languish in yet another crisis, the memories of a sunny day when the world seemed to be at their feet remain. At the heart of the fairytale was a modern bride with her own sense of style who took well loved to new levels. Here's a look back at the royal wedding dress of Infanta Cristina of Spain...the princess bride who could seemingly do no wrong.

This royal bride was a mix of modern and traditional. Her dress was designed by Lorenzo Caprile, now better known as a go to designer for Queen Letizia, the sister in law with whom Cristina is said to enjoy less than friendly relations.

The most striking feature is the off the shoulder neckline. A major surprise at the time, it suited the bride down to the ground but raised some eyebrows as royal wedding dresses usually go the full covered up route. The gown is made of off white silk and features full length sleeves, a sculpted bodice effect around the waist and a full skirt which fans out gently into a bell shape.

If you go really close to the screen and squint you can just make out the rather delicate embroidery sitting at the waistline but overall this gown is very simple and all the better for it. Cristina was the darling of the Spanish monarchy then, seen as down to earth and full of life and this classic creation let the bride wear it rather than the other way round.

There is a train (compulsory at royal weddings, Meghan Markle take note) and it extended a full three metres behind the bride as she smiled her way into Barcelona Cathedral. Covering it is a lace veil once worn by Cristina's great grandmother, Queen Victoria Eugenie of Spain. Made in the 19th century, it was restored for Cristina to wear. A nod to the past by a modern bride who at the time seemed to carry so many of the hopes of the Spanish monarchy for the future.

We all know that this fairytale has some rather dark twists in it. The couple were the golden hope of the Borbons for several years with four beautiful children cementing the image. But the financial scandal which engulfed them changed everything. Earlier this year, Cristina was acquitted of tax fraud while her husband was found guilty of embezzlement and is currently appealing against a six year prison sentence. It was just another blow for the Spanish monarchy which has struggled in recent years and now faces another crisis as King Felipe VI's speech to his country following the Catalan referendum divides opinion while the region plans to declare independence. It's all a long way from that sunny day in Catalonia twenty years ago when Spain's monarchy was the unifying factor in a day of celebration that the world watched with a smile. The dress remains beautiful even if the dream is fading for good.
at October 04, 2017
Email ThisBlogThis!Share to TwitterShare to FacebookShare to Pinterest
Labels: Royal Wedding Dresses, Spanish Royalty