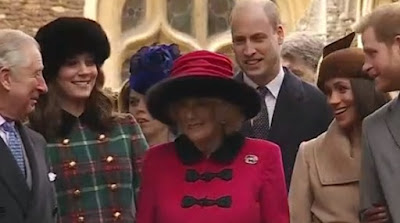 Christmas is sparkling at Sandringham this year with huge crowds turning out to see the Royal Family. Well, let's face it, to see a soon to be member of the Royal Family. Meghan Markle has spent her first festive season with Harry's rellies and it all looks to be going marvellously well. Ms Markle came dressed as a (very stylish) duchess and we all got the photo we wanted as she and Kate strode to church together. Here's how Mrs Cambridge and Mrs (in May) Sussex gave the royal Christmas some sparkle.

Meghan and Kate arrived side by side for this first Christmas together. Meghan's presence at Sandringham is making headlines around the world as it's unusual for a royal fiancee to get an invite to the Christmas celebrations. But the duchess in waiting looked very relaxed as she walked to St Mary Magdalene Church alongside Prince Harry and the Duke and Duchess of Cambridge.

Kate was in tartan (this duchess does like a bit of festive dressing, she went for checks the year that Prince George was born) while Meghan played it classic with a camel coat, long boots and a rather nifty hat.


They walked to church from Sandringham House along with many other members of the Royal Family. The Countess of Wessex won the style stakes with a knockout Fifties style outfit while Princess Beatrice and Princess Eugenie kept it simple in shades of blue.


Embed from Getty Images
Princess Anne won oddest hat of the day with a strange ensemble that covered half her face. But her daughter in law, Autumn Phillips, kept the family in the mix with a red and blue winner.
Embed from Getty Images
The Queen had arrived earlier by car with best seat in the garage going this year to the Duchess of Cornwall who accompanied her mother in law to church. Camilla seemed to be searching for Charles on her arrival - he walked to church, arriving a few minutes later. But they were all together again for the big exit.
Embed from Getty Images
And as the Queen swept away by car, Meghan and Kate took centre stage again. The curtsies were in almost total unison (although Megs wins in the drama stakes with the full head incline that came with her bob) and then they headed off to meet wellwishers and collect flowers. First Christmas together, truly sparkling.
Photo credit: BBC News still
at December 25, 2017
Email ThisBlogThis!Share to TwitterShare to FacebookShare to Pinterest
Labels: British Royalty, Harry and Meghan, Meghan Markle, Prince Harry, Sandringham, The Royal Christmas