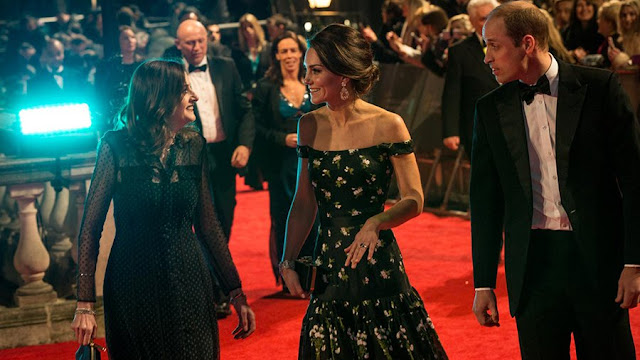 The Duchess of Cambridge on the red carpet at the 2017 BAFTAs. William came too.
(photo Kensington Palace Twitter)

Well, that was a style success and a half. There's been a lot of love for the red carpet look of the Duchess of Cambridge as she sashayed into the BAFTAs this weekend. We got a designer gown AND heirloom jewels, which was always going to be a winning combination. In honour of Kate's gala success, here are ten red carpet looks that went down well for the duchess.

Luckily the word dazzle starts with the same letter as duchess leading to plenty of easy to write headlines as Kate produced a knock out look for her trip to this year's BAFTAs. The dress was Alexander McQueen, the diamonds were the Queen's and the whole look was a huge success. A few years back it was reported that her grandmother in law had told Kate to try longer skirts and more jewels - she needs to listen to granny, as usual the Queen is spot on.

When you marry the President of BAFTA you can expect to hang out with film stars. Back in 2011, just after her wedding, Kate walked the red carpet in Los Angeles at a BAFTAs Brits to Watch event. It was Alexander McQueen, it was gorgeous and it remains one of her best known and most popular looks.

In 2012, Kate did the whole red carpet in the rain thing as she and her husband attended the UK premiere of the film 'War Horse'. This autumn outing saw Kate opt for a black lace evening gown by Temperley London. A few more diamonds might have added another dash of sparkle but this is still super elegant.

The Duchess of Cambridge got everyone talking when she went backless for a Bond premiere in 2016. Kate walked the red carpet with William and Harry in a daring Jenny Packham gown that got really interesting when she turned her back. The jury is still out as to whether it's a total dazzle - there's a lot of fabric going on here that doesn't necessarily make the most of the look - but it was a fashion forward move from Kate.

Kate showed she is a fearless red carpet veteran when she chose a sequinned column dress for a glitzy arrival just six weeks after Prince George was born. There was no hiding behind capes or flowing gowns for this duchess. Kate looked beyond great as she sparkled in a tight fitting gown by Jenny Packham that really did wow as she and William attended the inaugural Tusk Awards in London.

The Duchess of Cambridge was back on the red carpet just a few months later when she and William attended the London premiere of Mandela: Long Walk to Freedom. This was another fashion forward choice for Kate as she opted for a white gown by Roland Mouret with a high top and leg slit. Almost too understated, it's one of her least sparkly premiere looks.

It was all white on the big night last November when Kate attended the premiere of A Street Cat Named Bob in London. This time round it was a two texture gown by London label, Self Portrait, which included a crochet effect lace top and plain skirt with slit. Hitting the casual chic vibe, it works well and adds another fashion forward moment to Kate's wardrobe.

We got a classic black lace look from Kate when she walked the red carpet at the Royal Variety Performance in 2014. Already into the second trimester of her second pregnancy, the Duchess of Cambridge opted for a simple full length gown by Diane von Furstenbuerg with lace sleeves and not much sparkle at all. This is a gown that needs diamonds - a rewear with serious jewels must be on the cards.

A rare foray into colour on the red carpet took place as Kate's 2016 tour of India got under way. On the first day of her visit, Kate attended a Bollywood gala in a royal blue dress by Jenny Packham with embellishments added in India. Probably the least likely of Kate's red carpet looks to feature in the possible rewear list as it suited this occasion SO well.

One of Kate's most dazzling red carpet looks came in the early days of her marriage when she was an off the shoulder black velvet dress to the Sun Military Awards in 2011. She got to walk in with two princes as both William and Harry were there but no one really noticed as they were all too busy looking at this standout Alexander McQueen dress. Two words, dazzle and duchess, you do the rest.

Do you have a favourite Kate red carpet look from this line up? Please share in the comments section below, it would be great to hear from you.