The Royal Wardrobe: an image of royalty 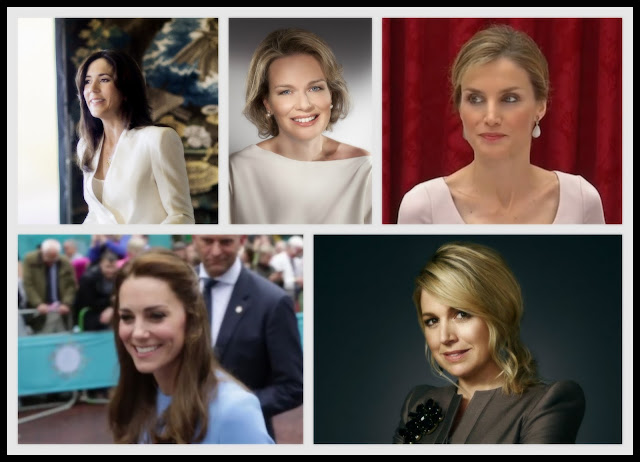 After the royal week we've had, we need a bit of relaxation so step into the Royal Wardrobe. There have been plenty of regal sightings this week but as we've also got an Herrera evening gown the poll has to be slightly different. Because skinny jeans vs Herrera evening gown isn't going to be tense. Ever. This time round, there are 5 royal outfits worn within 24 hours of each other, but with a different question. Which best fits your idea of modern royal dressing in 2017? If you want to join the debate, check the opinion piece here. Or if you just want to look at the clothes, here they come - and remember to vote.  Results here on Tuesday.

We're looking at five appearances in the 24 hours between February 14th and 15th 2017 and first out of the blocks was the Duchess of Cambridge who was up bright and early for a visit to RAF Wittering in her role as Honorary Air Commandant and Royal Patron of the Air Cadets. And breathe. But Kate also wore one of the more controversial royal outfits of the week. It was Valentine's Day so red was almost compulsory and we know how this duchess loves a double breasted blazer with brass buttons so no surprises with the jacket. The black boots are old favourites as well. What caused the debate was the reappearance of the skinny jeans. These jeans are skinny. And they do look like, well, jeans. Or leggings. Quite possibly jeggings. They also appear not to fit terribly well as, for the second week in a row, Kate spent quite a lot of time pulling them up. A modern take on royal dressing or just out of place? You decide.

Another Valentine's royal was Queen Maxima who headed to the Emma Children's Hospital in Amsterdam on February 14th. She went pink rather than red on the modern feast of all things schmaltzy. Her rose dominated print dress is royal recycling and then some - first seen in 2006 and worn several times since. It's a simple shape, modest with its long sleeves and, for Maxima, a really rather subtle print. Of course she's added a huge belt that just about matches. But is it also slightly, well, dull? Maybe that's what we want from our image of royalty today - smart, serviceable and value for money. Come on, an 11 year old frock has paid for itself and then some.

Steady yourselves, here comes the Herrera.  On Valentine's night, Princess Charlene of Monaco stepped out in a bright red fairytale gown as she headed to the Laureus World Sports Awards in Monte Carlo hand in hand with her husband. We've got a daring neckline with skinny straps to break up the bare shoulders. There's also a huge skirt and a train. What's more royal than a train? It's a gal gown for a gala event and in some ways, these are by far the easiest events in the Royal Wardrobe diary because big frocks and a few rocks are all but compulsory. But is the fairytale princess look turning into a cliche in 2017?

Queen Mathilde of the Belgians was out and about on a series of engagements in Verviers just hours after the party in Monte Carlo came to an end and she was keeping things very traditional as far as royal dressing is concerned. This green dress and coat, worn on a high profile day out during her State Visit to Japan last autumn, ticks every royal box going - couture, long sleeves, mid skirt and shoes that don't quite go. Ten years ago, it would have appeared on the same set of engagements with a hat. It is just what we expect royal women to wear but is that what we want from the image of royalty now? It's been said more than once that the royals of today are celebs as much as members of ancient institutions. Like that analysis or loathe it, does traditional help when keeping up with the modern neighbours?

Rather selfishly, Queen Letizia didn't come out of the house on Valentine's Day but given the week that Spain's royals have had, we'll let her off. She held a series of audiences the following day, keeping the arbitrary 24 hour rule of this week's poll in view, and as we'd expect from her she was doing fashion forward. But as we've also come to expect from Letizia, that doesn't always work. The skirt and shoes combo is smart if severe but it's the shirt here that's raising questions. Apart from the strobing (and given her TV past it's a surprise). it's also, shall we say, casual. The rolled up sleeves, the unbuttoned top and the light fabric all give off an informal air. Yes, Letizia is a working royal but is this more executive office than royal audience?

OK, this is all very subjective and one person's couture is another's mother of the bride boutique but so much emphasis is placed these days on how royals look that I thought it would be interesting to ask what we expect royals to look like now. The poll is doing just that - which of the five appearances in that 24 hour period looked most royal to you? Come back on Tuesday to find out....or join the debate in the comments section below, it would be great to hear your take in the debate about royal image.