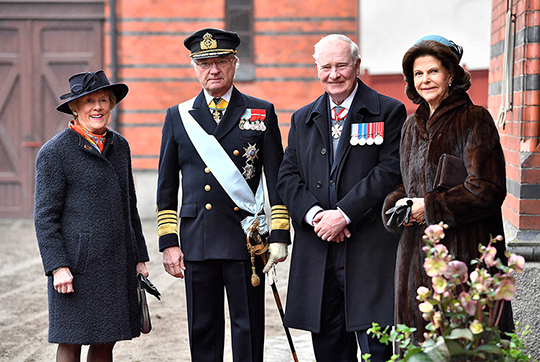 King Carl XVI Gustaf and Queen Silvia welcome the Governor General of Canada, David Johnston, and his wife, Sharon to Sweden on their State Visit
(kungahuset.se)
We have incoming. The Swedish Royal Family welcomed the Governor General of Canada this week for a four day State Visit. The trip included business, basketball, tiaras and trucks but no Crown Princess Victoria. Here’s a look back at the week when Sweden welcomed Canada. 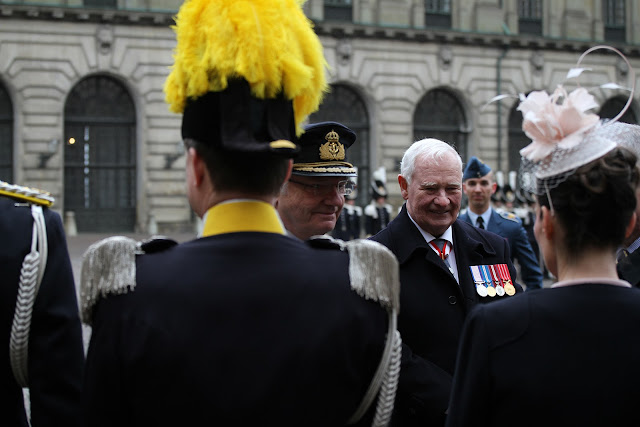 The visit began with official welcomes on February 20th as King Carl XVI Gustaf and Queen Silvia met their guests, Governor General David Johnston and his wife, Sharon, at the Royal Stables in Stockholm where they hopped into some rather historic carriages and enjoyed a late winter’s ride through the streets of the Swedish capital to the Royal Palace. There the official welcome included both country’s national anthems being played and an inspection of the Guard by the Governor General and the King of Sweden. 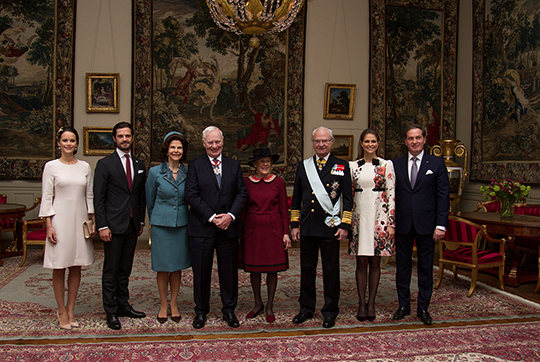 Also on hand for the welcome were Prince Carl Philip, Princess Sofia, Princess Madeleine and Chris O’Neill – Victoria and her husband, Prince Daniel, are away with their young children, enjoying family time before Estelle starts school.  After posing for photos, the royals and their guests enjoyed lunch before the Governor General headed off for a meeting with Sweden’s Prime Minister, Stefan Lofven. Sharon Johnston visited Fryhuset, which provides all kinds of opportunities for young people to learn new skills and get support, if needed, for social issues. It also provided an opportunity for Sharon Johnston to give us one  of the photos of the week as she showed everyone just how things are done on a basketball court.

The evening was all about the State Banquet which comes with this kind of trip. We got plenty of tiaras, a rather daring dress from Princess Madeleine and a speech from King Carl XVI Gustaf exploring the many links between Sweden and Canada.

Day two, February 21st 2017, began with the Swedish King and the Canadian Governor General attending a trade seminar on opportunities for businesses from their countries from the trade agreement between the EU and Canada.  Queen Silvia and Sharon Johnston spent time at the National Centre for  Suicide Research at Karolinska University. They were later joined by their husbands to be given a tour of the research there using 3D bio printers to study tissue and nerve cells. They ended the morning at the Nobel Forum hearing about work in developmental health. 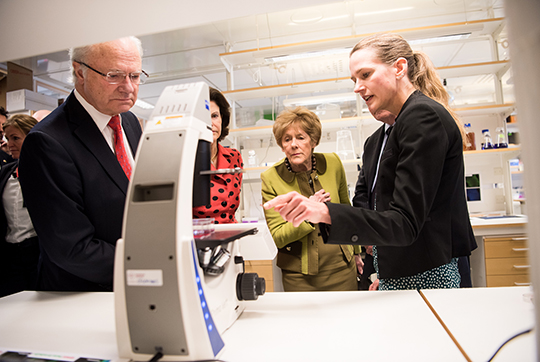 Lunch on day two was at Stockholm City Hall where Prince Carl Philip and Princess Sofia also joined the party. 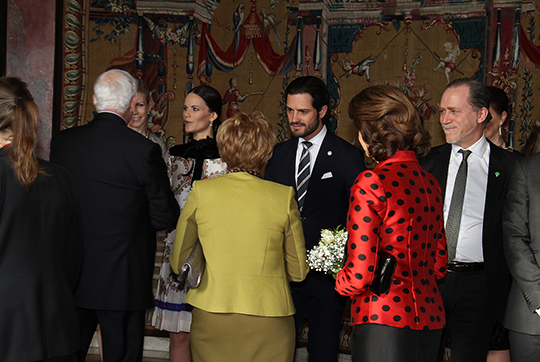 The afternoon of day two was focused on science with King Carl XVI Gustaf and the Governor General of Canada visiting the Royal Swedish Academy of Sciences. Queen Silvia and Sharon Johnston spent time at the Ageing Research Centre where they took part in a discussion on improving life for people with dementia. The Queen of Sweden, who set up the Silviahemmet Foundation in 1995 to help people with dementia, showed Sharon Johnston some of the ways houses can be adapted to make them better for those with the condition. 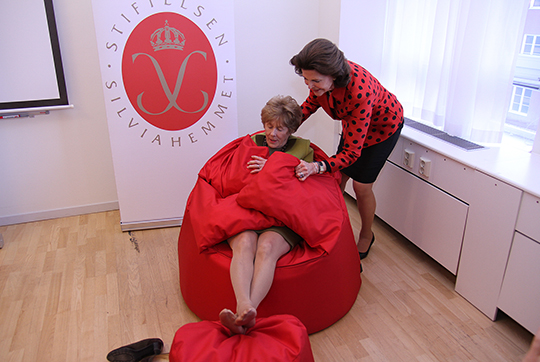 In the evening, David and Sharon Johnston hosted a thank you event at the Vasa Museum with Prince Carl Phiip and Princess Sofia joining the King and Queen of Sweden. 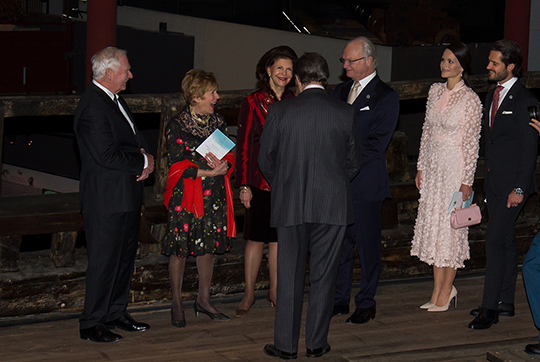 Day three, February 22nd, saw Carl XVI Gustaf and Silvia take their guests to Malmo. At the city’s university, there were discussions about diversity in Swedish and Canadian society for the men while their wives were given an overview of projects to help families where one or both parents have mental health issues or are coping with addiction.

After lunch at the County Governor’s official residence, it was off to AterSKAPA for Queen Silvia and Sharon Johnston where they heard about learning creativity through play. King Carl XVI Gustaf and David Johnston got really scientific as they headed to the European Spellation Station which is being built near Lund – it will house multi disciplinary research based on the world’ most powerful neutron source. So there. Unsurprisingly, they called it a day after that. 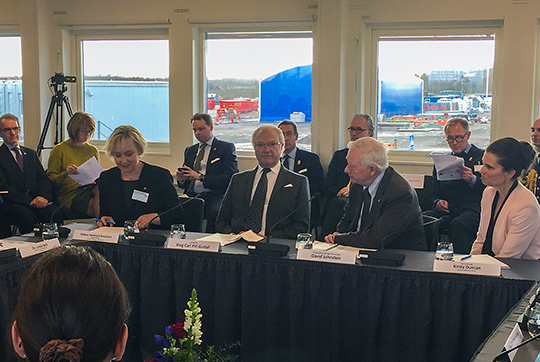 They needed to rest because there was more science to come as the State Visit ended on February 23rd 2017. The Governor General of Canada was hosted by King Carl XVI Gustaf and Prince Carl Philip in Gothenburg, where the day started with a boat trip and a chat about the development of the harbour there before more discussions about the development of the city at Linholmen Science Park.


We've arrived in the final city we'll visit during #GGSweden. We look forward to a day in #Gothenburg! pic.twitter.com/GzYK1qtMTF
— David Johnston (@GGDavidJohnston) February 23, 2017

There was a short foray into sustainable shipping before we got that staple of a State Visit – a photo of royals on a bus. Carl Gustaf, Carl Philip and their guest took a ride on an electric bus where they talked science and green technology and we added another picture of kings and princes on the number 55 to the royal album.

Green technology in transport was on the agenda in the afternoon when the royals and their guest headed to Westport AB Sweden to hear about work on biogas cars. Then it was off to the Volvo Truck Experience Centre for further discussions on sustainability in transport.

Sharon Johnston, who spent the morning at Haga hearing about the work of the Mother and Child Healthcare Team, joined her husband at Landvatter airport for the official farewell ceremony. And with that, the Canadian State Visit to Sweden was over.  It all seemed very happy and very relaxed, a high point in a quiet royal month and a taste of a much busier royal season to come.