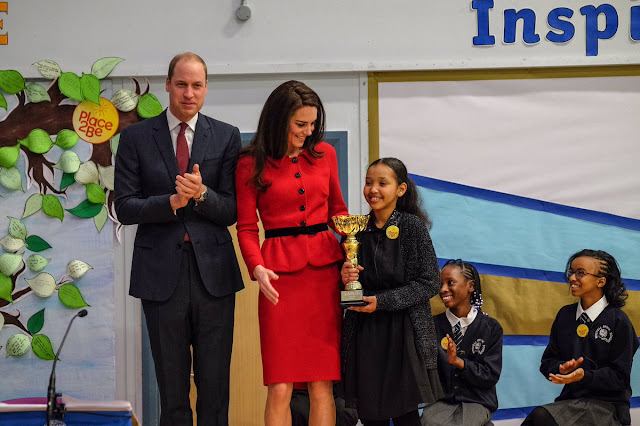 The Heads Together campaign is building a head of steam. In the last three days, William, Kate and Harry have been at the forefront of a series of engagements to highlight mental health issues. We've had races, we've had speeches and we've had a new series of heartfelt appeals to talk about problems. These have been real red letter days for these royals.


OK, let's start with the race. The Duke and Duchess of Cambridge and Prince Harry headed to the Queen Elizabeth Olympic Park in east London on February 5th for a spot of marathon training.


They were there to meet some of the organisations and people involved in making this year's London marathon all about Heads Together - it's the official charity for the event and the whole campaign was launched last year on race day.


They chatted with those getting ready for this year's race and got some tips from marathon star, Paula Radcliffe. It's been reported that the three royals wanted to run this year's race but security concerns made it too tricky. That didn't seem to stop them getting into the swing of things. Here comes the race.


Yes, William, Kate and Harry lined up against one another for a quick dash along the track.  This was all about running in front of the world to raise awareness and into a huge bank of cameras all waiting to catch the winning moment. Harry took the title - quite easily, in fact - with William only just pipping Kate into third place. But then the Duke of Cambridge did decide to run in a dad jumper - that can't have helped.

Behind the smiles, the new red jacket for Kate and the giggles at managing to run along the track without falling over, there was a serious message. This latest stage of the Heads Together campaign has focused on getting people to talk, to find someone who will listen or to offer to hear someone's problems to help them share their issues.

The royal trio spent a lot of time listening themselves - hearing the stories of those who wanted to run the London Marathon this year and talking to some of the experts there about the importance of talking in improving mental health.

Then it was Kate's turn to talk. On February 6th, the Duke and Duchess of Cambridge headed to Mitchell Brook Primary School in London for the Place2Be Big Assembly - Kate is the Royal Patron of Place2Be.


As well as getting to meet a lot of very excited school children who queued up in the chilly winter sunshine to chat to their royal guests, the Duke and Duchess of Cambridge were there to help launch Children's Mental Health Week. Cue Kate.

The Duchess of Cambridge gave a short speech at the big assembly talking about the importance of good mental health for children and young people.

The Duchess is speaking at the @Place2Be Big Assembly on the importance of the mental health of children and young people #ChildrensMHW pic.twitter.com/dxfDdPkELb
— Kensington Palace (@KensingtonRoyal) February 6, 2017

Kate told her audience that she put a huge amount of importance on kindness and that ''every child should have people around them to show them love and show them kindness'' and she praised the school for doing just that.

Then it was time for the trophy. Place2Be gave out its Kindness Cup for the first time this year and after hearing stories from different pupils about how they have tried to help and support others, there was a royal presentation. Nadia Dhicis had already been selected as the first winner of the Kindness Cup and it was Kate who handed it over.

That evening, the Duke and Duchess of Cambridge headed off to the Health Writers UK conference in London.

This meeting was focused on mental health with a spotlight on anxiety and the couple met experts before William gave his own speech.

The Duke of Cambridge again outlined the goals of the Heads Together campaign, underlining the importance of the project to get people talking to one another, and saying ''if more people speak about mental health in an open, honest and non-judgemental way, the easier the task will become.''  It came hard on the heels of more words of encouragement from William at the marathon training session the day before.

It was the final moment of a busy couple of days that has again underlined the royal support for this sometimes overlooked issue. William, Kate and Harry have plenty more events lined up for Heads Together in the days and weeks to come but this intensive period of support has turned into real red letters days for them and for the campaign.
at February 07, 2017
Email ThisBlogThis!Share to TwitterShare to FacebookShare to Pinterest
Labels: British Royalty