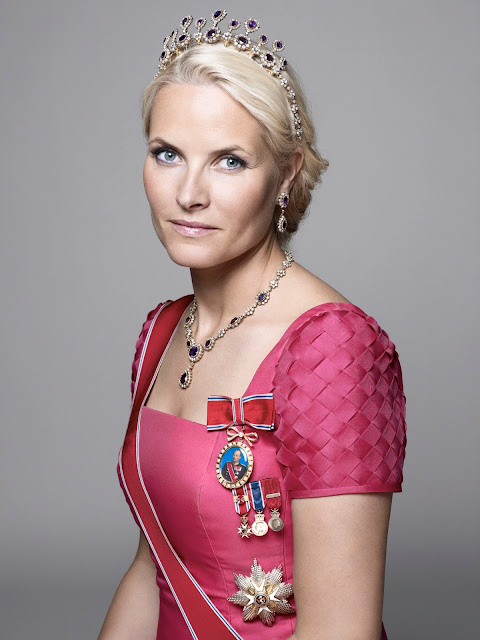 February is the month of amethysts and while this stone has a very regal colour - what could be more royal than purple - it's not that popular in current jewel collections in Europe's ruling houses. But when it does turn up in a tiara it's hard to ignore - the colour, the sparkle and the settings usually make for impressive pieces. This month's look at the stone in royal settings now arrives in Norway for the latest part in Amethysts for February.

The amethyst tiara belonging to the Norwegian Royal Family is among the most recognizable of the 21st century diadem club, partly because it's been a bit of a favourite of Crown Princess Mette-Marit over the past decade. It's been her go to for State Banquets and royal weddings and with its deep colour mixed with delicate shapes, it's a bit of a standout.

The tiara was first seen on Queen Sonja and it's thought to have been a present to her from King Harald - when you're a reigning monarch, vouchers are never an option.  It's one of those handy pieces of royal jewellery, the tiara that is also a necklace, and if we're honest, it looks it. 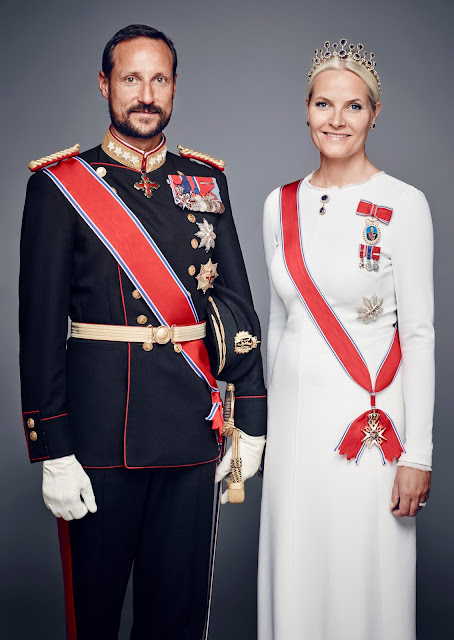 That's not to say it isn't rather lovely. The amethysts are a mix of round and pear drop shaped stones, all surrounded by diamonds. The round stones sit in a bottom row, interspersed with diamonds, and supporting the top row of oval stones, adding shape and height.  The royal ladies of Norway also have some rather striking earrings, a necklace and a brooch to match making this a very fresh and modern set of royal sparklers.

While Mette-Marit is mostly seen wearing this now, Princess Martha Louise has also used it in recent times. A modern addition to an historic royal collection that has really come into its own.
at February 13, 2017
Email ThisBlogThis!Share to TwitterShare to FacebookShare to Pinterest
Labels: Amethysts for February, Calendar of Jewels, Norweigan Royalty