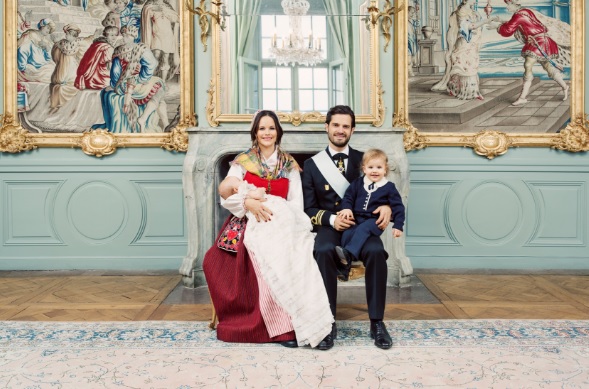 Mum did the really hard work, so as she celebrates her birthday, let's celebrate her baby. Princess Sofia of Sweden's second son, Prince Gabriel Carl Walter, was born on August 31st 2017 and on December 1st he was christened. The sixth in line to the Swedish throne was baptised at Drottningholm Castle on December 1st 2017 in an intimate ceremony attended by close family and friends. The baby cried, his parents looked beyond proud and his big brother almost stole the show. What more do you want? Here's a look at Prince Gabriel's christening, in pictures....

Prince Gabriel, Duke of Dalarna, arrived for the christening ceremony in the arms of his mother, Princess Sofia, who was wearing traditional folk costume with a nod to the dukedom of her younger son. Dad, Prince Carl Philip looked after big brother, Prince Alexander, who is now twenty months old.

Waiting for them in the Chapel of Drottningholm Castle were Alexander and Gabriel's grandparents, King Carl XVI Gustaf and Queen Silvia of Sweden, and Erik and Marie Hellqvist. Crown Princess Victoria, Prince Daniel, Princess Estelle and Prince Oscar were all ready in position, too, along with Chris O'Neill, as the little family made their entrance.

Gabriel's godparents lined up on the other side of the chapel - Princess Madeleine and Sara Hellqvist (his aunties), Thomas de Toledo Sommerlath (dad's cousin) and Carolina Pihl and Oscar Kylberg (both friends of the family).  They later stood around the font to lay their hands on Gabriel as he was welcomed into the Lutheran faith.

The ceremony was a sweet and intimate event and saw Princess Estelle take a starring role as she poured the water for her cousin's baptism into the silver font traditionally used at these ceremonies.

At the end of the christening, Gabriel's granddad, King Carl XVI Gustaf, presented him with the Order of the Seraphim, sweetly cradling his newest grandson's head after placing the sash across the vintage christening gown that the little prince was wearing.

After the service, Carl Philip and Sofia led everyone outside for a brief photo call. And just to add the perfect winter touch, it began to snow as they walked back into Drottningholm Palace. 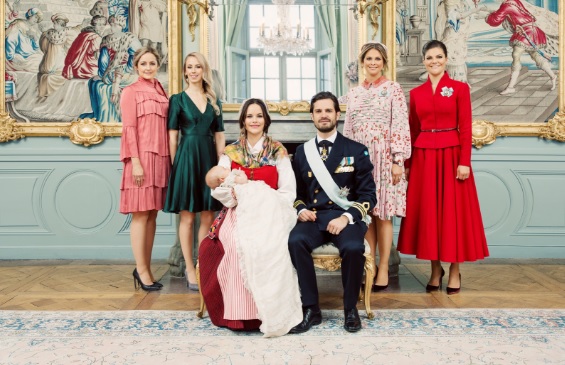