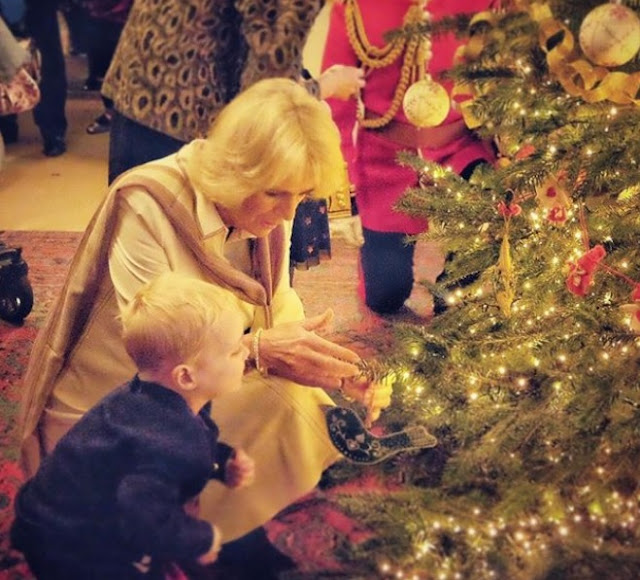 Christmas is the season of goodwill and there's been plenty of evidence of that in recent days. We've had a little market shopping, a very special trimming of a Christmas tree and celebrating with a meal with new friends. This is how the royals are sharing the festive love this December....

Today, The Duchess of Cornwall invited children from @helenanddouglashouse (of which HRH is Patron) and Roald Dahl’s Marvellous Children’s Charity to decorate the Clarence House Christmas tree.🎄 . . . #Christmas #ChristmasTree #RoyalFamily #TheDuchessofCornwall
A post shared by Clarence House (@clarencehouse) on Dec 13, 2017 at 5:44am PST


It really wouldn't be Christmas if the Duchess of Cornwall didn't invite some rather special children into Clarence House to help her decorate her tree. On December 13th, with just twelve days to go until Christmas, Camilla threw open the doors of her home to children from Helen and Douglas House which looks after youngsters with life limiting conditions. Every year the charity, of which Camilla is patron, brings children to Clarence House to help decorate the royal Christmas tree and it's something of a highlight. This year they were joined by youngesters supported by Roald Dahl's Marvellous Children's Charity and as the baubles were hung and the tinsel was draped, it was announced that the Duchess of Cornwall will become their patron, too. Which means next year's tree trimming is going to be just as wonderful all round.

Later in the day, Camilla joined the Prince of Wales for a visit to Borough Market in London to see how Christmas trade is going there. But there was a lot more to this than a quick trip to the shops. Charles and Camilla were there to see how tthe community is recovering following the London Bridge terror attack earlier this year. They were joined by the Archbishop of Canterbury, Justin Welby, as they toured stalls before heading into Southwark Cathedral for a Service of Light.


King Harald and Queen Sonja of Norway hosted a Christmas lunch on December 12th for guests including members of the Church Mission and the Salvation Army as a thank you for all the events they are invited to by them every year. They were joined by Crown Prince Haakon Magnus and Crown Princess Mette-Marit for a meal and celebration at the Queen Sonja Art Stables which are already decked out for Christmas with a fabulous tree and an exhibition all about the Norwegian royals at Christmas. King Harald also gave a rather lovely speech in which he told his guests that ''I think all of us who are gathered here today are keen to take care of each other.  There is something we must have with us in words, actions and in our hearts every single day throughout the year to create the society we want.''

The following day, Haakon Magnus and Mette-Marit kept the festive feeling going when they visited an old people's home in Lorenskog to celebrate the feast of St. Lucia with them. Mette-Marit passed round the traditional St Lucia saffron buns and then things got really festive as children from a nearby school arrived dressed for the occassion. Traditions that bring old and young together  - that really is the way to share the festive love.