The Royal Christmas 2017: those moody Belgians 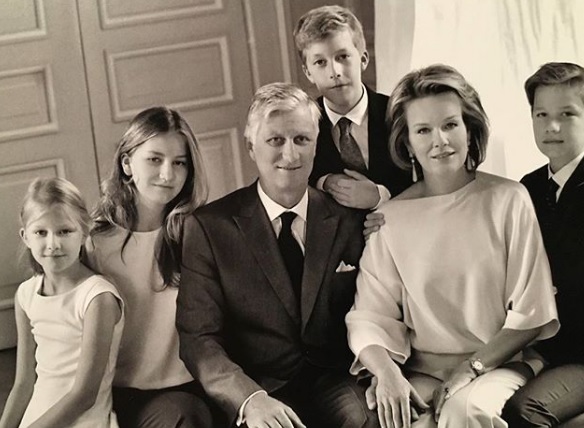 This year's royal Christmas cards haven't really ticked the festive box. We know they are meant to be lovely momentoes of the year just gone and a chance to send warm wishes for all that is still to be, but a little bit of snow or sparkle goes a long way. Not in 2017, it seems. The royals of Europe are sticking to formal portraits with about as much ho, ho, ho as a pair of flip flops and Belgium's bunch aren't going to do things any differently. The Christmas card from Philippe and Mathilde is all about moody.
The King and Queen of the Belgians are seen posing with their four children. The heir to the throne, Princess Elisabeth, sits next to dad (natch) while Prince Gabriel, Prince Emmanuel and Princess Eleonore are snuggled aroun the family group. It is rather lovely and that black and white touch adds a bit of something almost seasonal but this still isn't jingle all the way.

The Duke and Duchess of Cambridge are pleased to share a new photograph of their family. The image features on Their Royal Highnesses' Christmas card this year. The photograph shows The Duke and Duchess of Cambridge with their two children at Kensington Palace. It was taken earlier this year by @chrisjacksongetty Their Royal Highnesses have also announced this morning that Princess Charlotte will attend the Willcocks Nursery School in London from January 2018. The Willcocks Nursery School has said: "We are delighted that The Duke and Duchess of Cambridge have chosen the Willcocks Nursery School for Princess Charlotte. We look forward to welcoming Charlotte to our nursery in January."
A post shared by Kensington Palace (@kensingtonroyal) on Dec 18, 2017 at 3:25am PST

Their offering started doing the rounds on the same day as two more rather unfestive pictures appeared. One featured the Prince of Wales and the Duchess of Cornwall. The other was the much dissected image of the Duke and Duchess of Cambridge with their children taken for their 2017 Christmas card. The image, taken in the summer before baby number three started making their presence felt, has been roundly criticised for a lack of warmth and its rather stiff feeling. Not to mention the photoshopping - the search for Kate's right arm continues while the rather odd colour of her hair isn't helping anyone here. Right now, the royal Christmas is relying on Crown Princess Victoria for its sole dose of Christmas cheer. Let's hope 2018 is better.
at December 19, 2017
Email ThisBlogThis!Share to TwitterShare to FacebookShare to Pinterest
Labels: British Royalty, The Royal Christmas