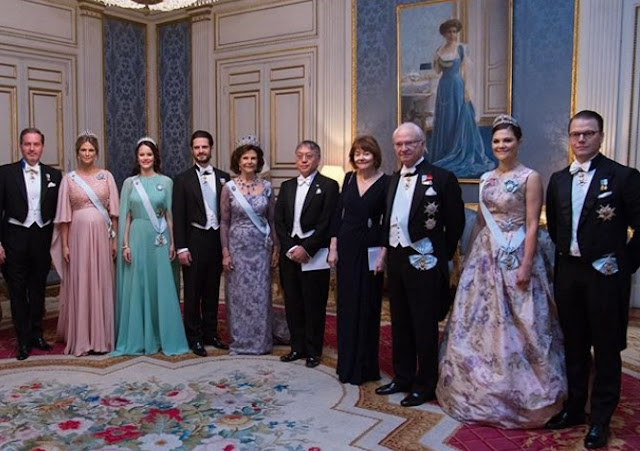 Sweden's royals were sparkling again last night as they hosted the Nobel Prize winners at a celebratory banquet. The King's Dinner is the last royal event in the always glittering galas that surround these awards (presumably Carl Gustaf isn't up first thing peeling spuds for it despite the name) and to round off this year's celebrations, the Swedish Royal Family brought out some of their biggest and best tiaras. And all of them with a wedding link.  As they pose for a photo with Literature Laureate, Kazuo Ishiguro, let's look at the buried jewellery giants they brought out to play...


Silvia really did go big for this last sparkly moment of the 2017 Nobels. She wore one of her favourites, the Leuchtenberg Sapphire Tiara. It's another of the Swedish sparklers with Napoleonic links - the sapphires in this set are believed to have been a wedding gift from Bonaparte to Augusta of Bavaria when she married the son of his first wife, Eugenie Beauharnais. While Boney was dishing out gems, Augusta's daddy handed the couple the title of Duke and Duchess of Leuchtenberg, hence the name. The gems arrived in Sweden with Eugene and Augusta's daughter, Josephine, who married the future King Oscar I. Silvia loves them and often uses them at Nobel events.

Crown Princess Victoria went for a more modern piece, wearing the Laurel Wreath Tiara which was left to her by her aunt, Princess Lilian, who died in 2013. It originally belonged to Princess Margaret of Connaught (the lovely lady in blue you can see behind the royals in the top image) and it was another wedding present. Margaret was given this by Queen Sofia of Sweden when she wed Prince Gustaf Adolf in 1905. Margaret died far too young, in 1920, and this tiara eventually ended up with her son, Bertil, who wed Lilian after decades of waiting on December 7th 1976. A nice touch from Victoria to show its sparkle as their anniversary is remembered. 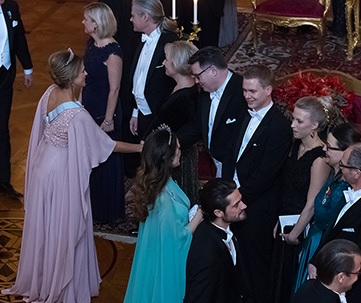 More wedding memories from Sofia who wore the tiara she was given by her parents in law when she married Prince Carl Philip in 2015. We've already seen this sparkler this week when Sofia swapped the emeralds for pearls at the Nobel Prize Ceremony itself. This time round, we saw it in its original version with the emeralds twinkling at the top and looking rather Christmassy.

Princess Madeleine also wore her wedding tiara to the King's Dinner. The all diamond Fringe Tiara is a bit of a favourite of Madeleine's and she famously nestled flowers around its base when she wed Chris O'Neill in June 2013. At this party, she wore it plain but then when you're rocking a diadem that contains so many diamonds, dull is never a problem. The tiara was first seen on Queen Silvia in the 1980s and it was given to Madeleine by her parents to mark her marriage. Another romantic gem moment on a night when the buried giants came out of the Swedish Royal Jewellery box.