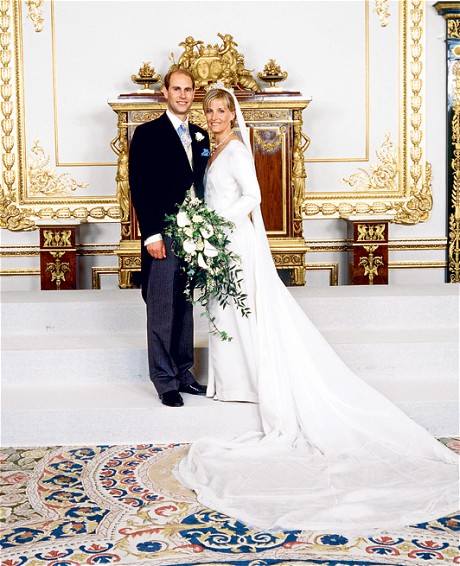 OK, anyone excited for the Royal Wedding? Thought so. We've still got five and a bit months to go before we see Meghan Markle as a royal bride but that doesn't mean we can't start ramping up the wedding fun and thinking all things matrimonial. There will be lots of features on the blog in the run up to the marriage of the year in May 2018 when Megs and Prince Harry plight their troths and first out of the starting blocks is a series on the frocks. Yep. we can pretend all we like that we're interested in the hymns/ cake/ groom's uniform but what we really all want to know is what Meghan's wedding dress will be like. So to get in the mood, I'm going to profile the Windsor Wedding Dresses over the coming weeks and I'm starting with the last major royal bride to walk down the aisle at St. George's, Windsor - the Countess of Wessex. Sophie Rhys Jones was the last British royal bride of the 20th century and she did it in style. Here's a look back at this very regal gown from June 19th 1999 as we start the series, Windsor Wedding Dresses.

The gown was designed by Samantha Shaw and is made of silk crepe and silk organza. It has a deep V neck and has a coat dress effect - rather similar in some ways to the dress which would be worn by Mathilde of Belgium just months later. But this gown also took its setting as part of its inspiration and that helped it stand out from the crowd.

The sleeves are long and fluted at the ends, reminiscent of the gowns seen in medieval tapestries. The over layers of the skirt billow out into a long train - this is a royal wedding after all - that flow from the dress itself while the gown itself has a medieval shape with a modern twist.

This gown also had plenty of simple sparkle. It was scattered with 325,000 crystal beads and pearls which caught the light in the chapel without sending everyone into a glitter frenzy.  There was also a light veil dotted with crystals covering the train and held neatly at the back of her tiara.


The addition of the unusual and specially designed pearl necklace added another element of olden times to this very 20th century gown - it was a gift from the groom and matched the black and white worn by the pages and bridesmaids.

Sophie's dress has retained its classic style seventeen years on and while it may not be the most famous of royal wedding gowns. it's certainly one of the most elegant. It suited the bride to perfection and still looks great. Sophie's stylish dress, inspired by the past, has its own place in history.  We'll have another installment of Windsor Wedding Dresses later in the week.
at December 04, 2017
Email ThisBlogThis!Share to TwitterShare to FacebookShare to Pinterest
Labels: British Royalty, Harry and Meghan, Royal Wedding Dresses, Windsor Wedding Dresses