5 royal outfits for a civil marriage 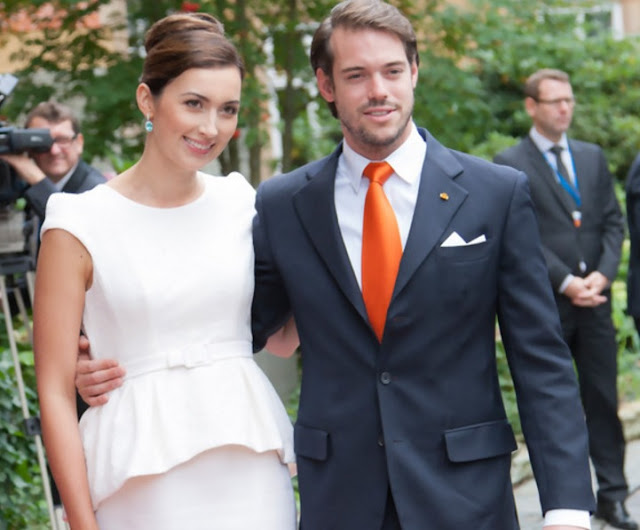 Royal civil weddings, eh? Why on earth would anyone be thinking about those right now? Odd. But as we are, let's talk outfits. Several European royals have had a civil and religious wedding on the same day in which case there's no change for the bride. They can keep their big frocks to themselves right now. We're looking at outfits made purely for a civil marriage. Other brides have said 'I do' in front of a registrar in a different outfit from the one worn to the church for their religious wedding or blessing afterwards. Among them is Claire Lademacher whose civil wedding to Prince Felix of Luxembourg took place on September 17th 2013. In honour of that, and the possibility we might just be doing civil weddings in the UK again sometime soon, here's a look at five recent times we've seen royal brides dressed for a civil marriage.


And the bride wore white. No surprises there then. Claire Margareta Lademacher's civil marriage to Prince Felix, second in line to the throne of Luxembourg, took place in Konigtein near Frankfurt on September 17th 2013. Claire, whose civil wedding took place near her home town as is traditional, chose a simple but striking ivory dress with cap sleeves and a peplum waist. Keeping it bridal, she carried a bouquet of cream roses with white flowers and added something blue with aquamarine jewels. The couple's religious wedding took place on September 21st 2013.

Charlene Lynette Wittstock went for all blue when she wed Prince Albert II of Monaco in a civil ceremony in the principality on July 1st 2011. The bride chose a shimmering shade that was dubbed 'Charlene blue' after the wedding. Charlene also helped design the outfit alongside Karl Lagerfeld. It was a surprising look, pairing chiffon trousers with a neat jacket. But it made more sense in the evening when the bride lost the jacket and revealed the trousers were part of a rather cutting edge strapless outfit. This is perhaps the most unusual royal wedding outfit we'll see in a long while. The couple's religious wedding took place on July 2nd 2011.


Camilla Rosemary Parker Bowles kept things much more traditional when she said 'I do' to the Prince of Wales in a civil ceremony at Windsor Guildhall on April 9th 2005. Camilla chose a chiffon cream dress with applique details at the hem and a cream coat, both by Robinson Valentine. There was a cream hat with feathers, by Philip Treacy, but no flowers for this civil marriage - Camilla kept the bouquet for the blessing at St George's Chapel, Windsor, later that day.

Princess Laurentien of the Netherlands
Civil Ceremony May 17th 2001

Petra Laurentien Brinkhorst was pretty in pink for her civil wedding to Prince Constantijn of the Netherlands on May 17th 2001 in The Hague. Constantijn was the first of the three sons of Beatrix of the Netherlands to wed and his bride got things off to a bright start with a rosy wrap coat and pale mauve wide brimmed hat that made sure no one lost this new princess in the crowd. Laurentien was the only one of the three brides of that royal generation to have a separate outfit for her first ceremony - she was traditional in white for her religious wedding in The Hague on May 19th 2001.