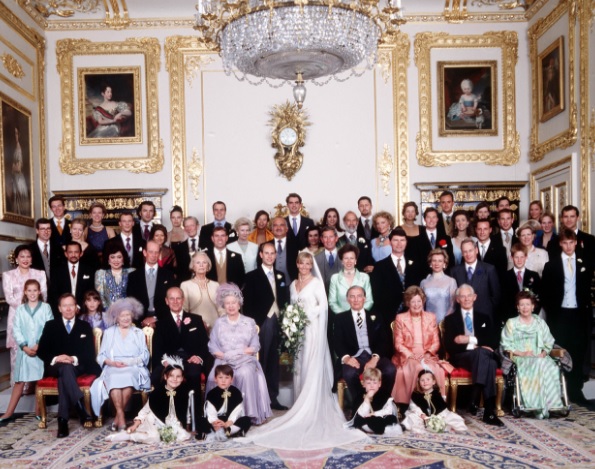 A royal wedding bouquet is a big ask. It's got to be big enough to see on camera (we're looking at you, here, Kate) while not so huge that it drags the bride up the aisle (Queen Mathilde, you know this means you), take account of any symbolic/ dynastic/ romantic messages its bearer wants to send and maintain a whole millennium or so of royal tradition. All in one bunch of flowers. It's perhaps for this reason that plenty of royal brides have fallen at this sartorial hurdle. No such problems for Sophie, Countess of Wessex. Meet the queen of royal bridal bouquets.


Sophie's marriage to Prince Edward on June 19th 1999 is about as close as we've seen a royal wedding come to having a theme. Sophie's dress had hints of the medieval damsel about it while her bridesmaids and pageboys were in outfits with more than a nod to the Middle Ages. The bridal party was mostly in black and white and somehow Sophie got her flowers to follow suit and still look good.

The stand out bloom in this arrangement is that wedding staple, the calla lily. This was a new version of a tall lily, called Sophie after the bride, and a huge cluster of them sat at the heart of the bouquet, giving it solidity and shape. They also echoed the trumpet shaped design of Sophie's sleeves and the gentle fluting of the skirt and train, Who's a clever countess?

The white in the bouquet was never going to be a problem and this arrangement also includes roses, freesias and lily of the valley. No need for perfume for Sophie on her big day, the scent of the flowers must have hit St George's Chapel at Windsor about an hours before the bride got out of the car.  But putting black in a bridal bouquet is hard work unless you're going goth. But the clever use of very dark trailing green leaves around those central lilies does the light and shade thing to perfection.

But was there any deeper meaning behind the flowers? We're used to royal brides cutting lumps off family trees to add to their bouquets or reverting to the language of flowers to spell out a message in petals. That's not what stands out about Sophie's bouquet. The lilies are an all wedding flower, just as likely to be found in the hands of brides across the world rather than just in a royal family album. And the language of flowers has them representing purity, innocence, youth - and rebirth. Given that this was the first big wedding after a difficult time for the Windsors, perhaps there was a message in there. Time for a fresh start - and bride Sophie has been instrumental in reshaping the House of Windsor for the 21st century.
at June 19, 2017
Email ThisBlogThis!Share to TwitterShare to FacebookShare to Pinterest
Labels: British Royalty, Royal Wedding Flowers