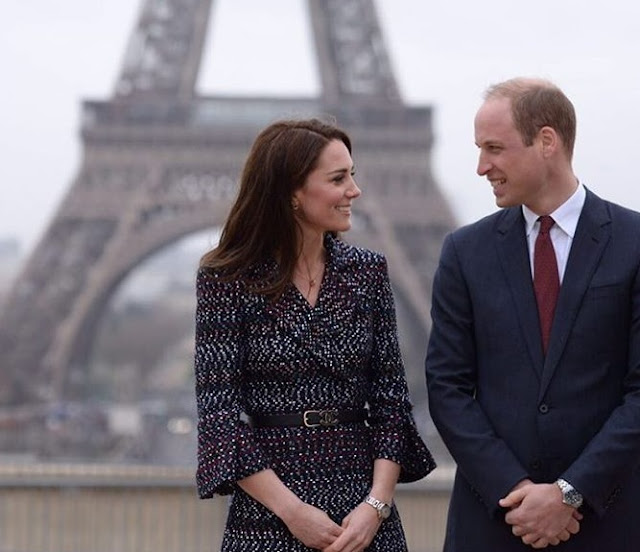 The Duke and Duchess of Cambridge have spent a second day in Paris. While the focus of day one was formal welcomes, day two was all about getting out and about. There were poignant moments, historic moments and sport face moments as the couple packed in plenty on their final day in the city of lights. Oh. and Kate wore Chanel. Here are the photos from Royal Visit Paris, day two.

The day began at Les Invalides, famous to tourists as a monument and museum but William and Kate were heading to the hospital there and the parts of the complex which supports veterans.

While there, the couple also met some of those being helped at the site including survivors of the Bataclan attack in 2015 and the Nice attack in 2016.

They also got the chance to chat to Invictus Games competitor, Sergeant Philippe, who has been supported at Les Invalides.

There was also a chance to meet many of those working at Les Invalides and their families in the first mini walkabout of the day.

Paris is the city of art so off William and Kate headed to the Musee d'Orsay where they viewed some of the most well known pictures in the world and ended up being caught on camera in an image that is already getting plenty of attention itself.

On day one, the couple attended a reception linked to Les Voisins, a scheme to emphasise ties between young people in France and the UK. Their second afternoon in Paris saw them head to one of its most famous landmarks, the Trocadero, to see the scheme in action.

It also gave them the chance to do the whole loved up in Paris thing as they posed in front of the Eiffel Tower.

Oh, yes, the Chanel. You need to get a good look now because we're heading for some coat action. Kate chose a burgundy print dress with iconic belt, matching bags and the new favourite burgundy shoes.

Here comes the coat. The Duchess of Cambridge wrapped up as she and her husband said farewell to their hosts and headed off for a chilly afternoon.

Kate and William watched Wales play France in the Six Nations Rugby - the first time the Duke of Cambridge has watched the side since he became patron of the Welsh Rugby Union. Presumably, they weren't listen to BBC commentary in which John Inverdale appeared to make a gaffe involving the royals by sharing, with several million viewers, his question of how much Kate really knows about rugby.

Then it was really time to say au revoir as Royal Visit Paris came to an end. If you've already got withdrawal symptoms, don't worry. Kate and William are off to Poland and Germany later this year. It's going to be a busy 2017 for royal tours.