The Queen unveils the Iraq and Afghanistan Memorial 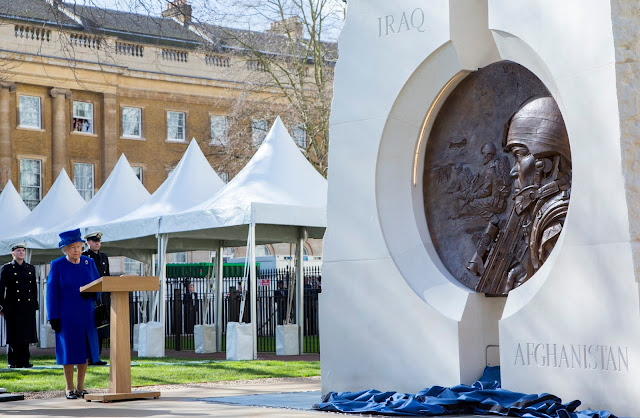 The Queen unveils the memorial to those who served in Iraq and Afghanistan
London, March 9th 2017
(photo UK MOD Crown Copyright/ Owen Cooban)

The Queen has led the Royal Family at a service to remember and give thanks for all those who served in Iraq and Afghanistan. The Queen also unveiled a memorial to those involved in the two conflicts. Elizabeth II and the Duke of Edinburgh were joined by other members of the Royal Family to stand alongside veterans and politicians for the services on March 9th 2017.


The drumhead service in thanks and in commemoration for service in Iraq and Afghanistan took place on Horse Guards Parade.

The ceremony included music from the bands of the Royal Marines, the Royal Scots Guards and the RAF and the Metropolitan Police Choir.

Prince Harry speaks at unveiling in London of memorial dedicated to those who served in Iraq and Afghanistan wars https://t.co/CkkwiPnDsY pic.twitter.com/L7oFuk7cNI
— BBC News (UK) (@BBCNews) March 9, 2017

Prince Harry, who served in Afghanistan during his ten years in the Army, gave a reading from the Book of Ecclesiastes.

Over 2,500 guests joined the Royal Family at the drumhead service. Among them were the Prime Minister, Theresa May, and some of her predecessors in the role including Sir John Major and David Cameron. Tony Blair was also present, drawing criticism on some parts of social media.


The memorial itself is in Victoria Embankment Gardens and the Queen made her way to the site, in the spring sunshine, where she led the solemn unveiling of the monument.

It is made of Portland stone, carved into two monoliths with a bronze medallion between them and was created by sculptor, Paul Day, who is also responsible for the Battle of Britain monument. The £1 million costs were met by a fund raising campaign by the Sun on Sunday.


This was a day to remember and to look forward and two youngsters ended up raising smiles. Alfie Lunn, who is two, was tasked with handing over flowers to the Queen . That wasn't on Alfie's to do list for the day - he had a good old wriggle and jiggle before his parents, Sergeant Mark Lunn and Corporal Michelle Lunn, managed to get him to perform his posy presentation.

During informal chats with veterans after the services, Princess Charlotte took centre stage as well as her mum, the Duchess of Cambridge, revealed that the fourth in line to the throne rules the roost at home. The revelations came in a chat with Samantha Burge who said she had been happy to chat about children as she wanted 'a mummy talk. I wanted to talk about something else than - '. War. the word missing at the end of that sentence and the reason veterans and families were there.

Over eight hundred service personnel lost their lives in the conflicts in Afghanistan and Iraq. Some said that the memorial will be a place to remember good as well as sad. The presence of the Queen and so many senior members of the Royal Family at this event shows the importance they, like so many, place on showing respect and thanks for the sacrifices made.

at March 09, 2017
Email ThisBlogThis!Share to TwitterShare to FacebookShare to Pinterest
Labels: British Royalty, The Roayl 2017