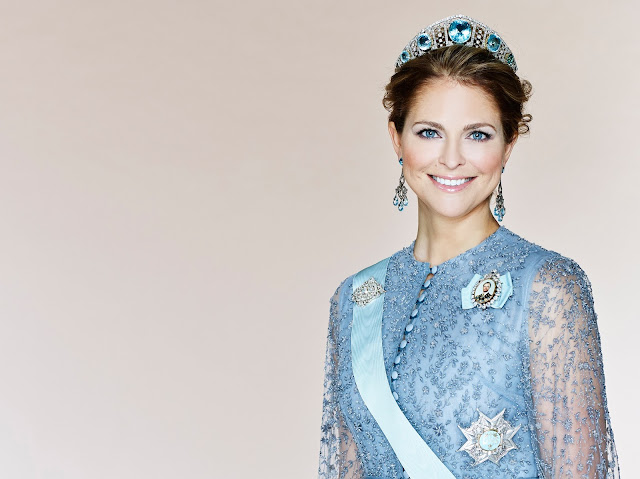 Princess Madeleine in one of the famous aquamarine tiaras belong to Sweden's royals
(photo kungauset.se)

Let's start with the star tiara of this month's birthstone. Right now, say royal and aquamarines in close proximity and someone will say Princess Madeleine. The Aquamarine Kokoshnik that the sixth in line to the throne of Sweden has made her go to is among the most photographed diadems of recent years. But the sparkler actually belongs to her auntie and is one of two aquamarine tiaras that call the Swedish royal jewellery box home. To start off Aquamarines for March, we're off to Sweden.


The biggie in the Swedish royal aquamarine collection is that kokoshnik and there's no missing this beauty - it's set with five huge aquamarines which nestle in a neat framework of sparkling diamonds.


The kokoshnik style of tiara was made popular at the Romanov court - it is a very sparkly imitation of a traditional Russian headdress. This version is said to have first belonged to Margaret of Connaught, the granddaughter of Queen Victoria who married king in waiting, Gustaf Adolf, in 1905 and became Crown Princess in 1907. It was a major part of the family sparkle used by Princess Sybilla who, like Margaret, was expected one day to become Queen of Sweden and who, again like her husband's mother, would never become consort. Margaret died in 1920, before her husband became king, while Sybilla's husband, also Gustaf Adolf, was killed in a plane crash in 1947 when he was second in line to the throne.

Embed from Getty Images
Aquamarines aren't up there with rubies or sapphires in the royal jewel collection so this very pretty tiara might have had trouble making it into a queen's only collection even without its sad history. But its charm and elegance have made it a popular piece with Sweden's royals over the last eighty years. Sybilla left it to her eldest daughter, Princess Margaretha, who had been seen in it many times already.  Margaretha's daughter, Sybilla, wore it for her own wedding. And the nuptial connections don't end there - Princess Margaretha showed it off at the marriages of Crown Princess Victoria in 2010 and Prince Carl Philip in 2015.

But in recent times, it's become associated with Princess Madeleine who wore it to the Nobel Prize ceremony in December 2015 and used it for an official portrait not long afterwards. It got even more international attention when she chose it for the tea party for seriously ill children she held at the Royal Palace in 2016 - that super sweet event, a royal dream come true, made headlines around the world with the tiara flashed up alongside them. Madeleine was last seen wearing it at the State Banquet earlier this year for the Governor General of Canada as part of the State Visit to Sweden. 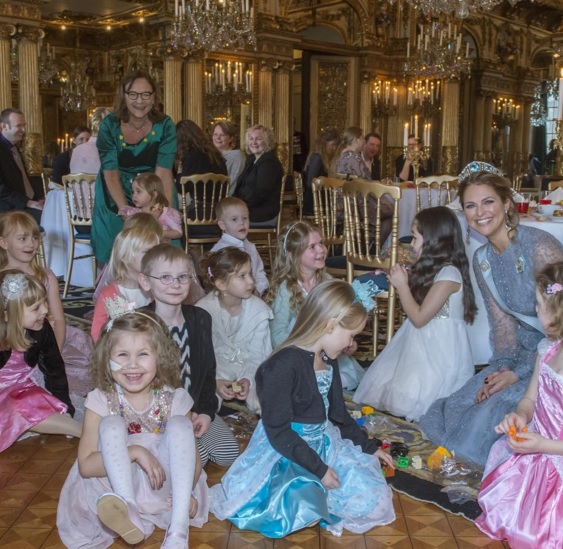 It's perhaps no surprise that Madeleine favours aquamarines so much. Apart from this tiara suiting her down to the ground, she had made the stone a go to as a young princess in the other aquamarine piece owned by her royal house. This one is much simpler and nowhere near as striking but it's still a sweet little sparkler.  Madeleine had a diadem debut moment in it when she wore it to the Nobel ceremonies of 2000, just months after she turned 18.

The bandeau style tiara features delicate rows of diamonds rising towards a central arch and holding a giant aquamarine. It's discreet, like every good bandeau should be, and Madeleine kept to the Swedish habit of aquamarines at weddings by wearing this one to the marriage of Crown Prince Frederik and Mary Donaldson in 2004.

Sweden's aquamarine collection has plenty of history but the pieces have a fresh feel to them and they've been used to great effect by all their royal wearers in recent years. Madeleine's preference for the stone has certainly given it a modern edge and the kokoshnik is so associated with her right now that it's almost a shock not to see her wearing it. But these aquamarines have plenty of royal rivals across the continent. Keep checking back throughout the month for more aquamarines for March.
Photo credit: kungahuset.se
at March 07, 2017
Email ThisBlogThis!Share to TwitterShare to FacebookShare to Pinterest
Labels: Aquamarines for March, Calendar of Jewels, Swedish Royalty