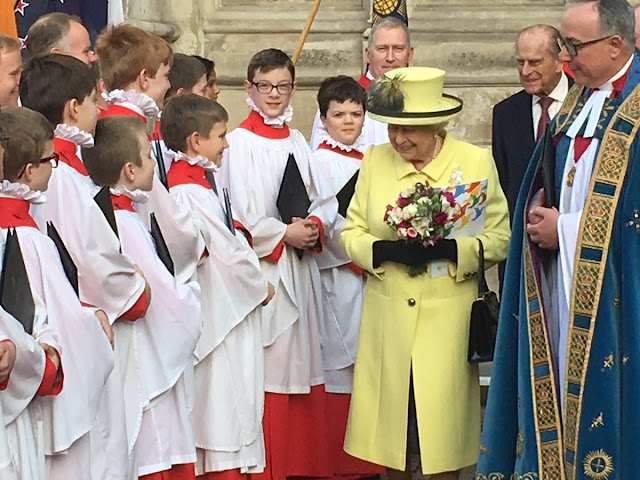 Commonwealth Day is all about celebrations and there could only ever be one person leading the way - the Queen. From baton relays to services of thanks, Elizabeth II was at the heart of events throughout the day. The Head of the Commonwealth put its values at the heart of the day that celebrates it.


Commonwealth Day 2017 began with a message from the Queen in which she paid tribute to those whose past work has laid the foundations for the peace loving organisation she praised, saying '' through consensus and cooperation great things have been achieved, adding ''we can find further rewards and fulfilment by continuing to collaborate with others in a spirit of goodwill to build a peaceful and abundant future for all Commonwealth citizens.''

There were two messages penned by the Queen this Commonwealth Day but we only got to read one. The other was neatly rolled up, ready for a royal tucking in at the first big ceremony of the day. Underneath some rather lovely, sunny skies, the Queen welcomed the Commonwealth Games Baton to Buckingham Palace and took hold of it just long enough to put her personal message inside and seal it away for safe keeping. There's no reading this one until the Games get under way in Australia next year.

The host country of the XXI Games was well represented at the start of the relay which will see the baton wind its way through all Commonwealth countries in Africa, the Americas, the Caribbean, Europe, Oceania, Asia and Australasia over 388 days. Star wheelchair racer, Kurt Fearnley, who won Commonwealth gold for Australia in 2010 and has three Paralympic golds to his name brought the baton down the Mall to Buckingham Palace.

Once the message was safely inside, the Queen handed the baton to Australian cycling star, Anna Meares, who walked it through the famous gates and handed it over to singer, Cody Simpson. The Gold Coast born star had already serenaded the crowds and was ready to add another Aussie touch by driving the baton away in a camper van.

The baton relay ceremony was also attended by the Duke of Edinburgh and the Earl of Wessex - the Countess of Wessex wasn't there as she is on a trip to Malawi.  And then it was everyone inside for a quick change before a truly special event in the royal year.

In the afternoon, the Queen led the Royal Family at the Commonwealth Day Service at Westminster Abbey.

The Queen and the Duke of Edinburgh were joined by the Prince of Wales, the Duchess of Cornwall, Prince Harry, the Duke of York and the Earl of Wessex.

The service, the largest annual inter-faith gathering organised in the UK, saw the flags of Commonwealth nations carried into the abbey along with the relay baton. The ceremony included prayers and the Act of Affirmation to the Commonwealth. There was also music  - including another performance from Cody Simpson and readings, one of them given by Kurt Fearnley.

Following The Service Prince Harry, The Duke of York and The Earl of Wessex all attended a reception for guests and school children where they met many guests which included High Commissioners, Ambassadors, Senior Politicians, faith leaders and 800 youngsters.
A post shared by The Royal Family (@theroyalfamily) on Mar 13, 2017 at 11:52am PDT

Prince Harry, the Duke of York and the Earl of Wessex went on to meet guests and children after the service while the Queen talked to some of those who had taken part in the event.

The Prince of Wales and the Duchess of Cornwall attended the Commonwealth Day reception, held in London.

The Prince and The Duchess are shown the #GC2018 Baton during @commonwealthsec's #CommonwealthDay reception. pic.twitter.com/n1DEA1O3ri
— Clarence House (@ClarenceHouse) March 13, 2017

This was also a bit of a social media special from the Royal Family who posted plenty of fabulous updates throughout the day on their Twitter account.  We got music, we got pictures. we got pictures with music - there wasn't a moment of Commonwealth Day they didn't cover.

There was a lot of love for those images and sounds as well, bringing in high numbers of likes and retweets throughout the day. It only goes to show just how important this moment is for the Queen and her family and how well appreciated that is by many.