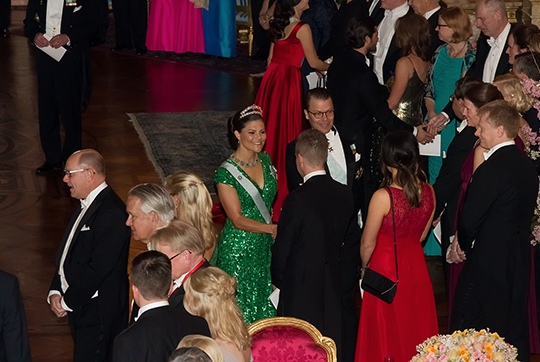 OK, it's not really a State dinner but it's a dinner, it's official and there are tiaras. What's not to love? Plus, as Sweden's royals began their 2017 season of formal gatherings we got a baby bump debut. There's more sparkle here than a night out in a glitter factory. Settle back and enjoy the latest tiara triumphs of Sweden's royals.


The night in question was an official dinner for a wide range of people including government officials, diplomats, politicians, sports and science representatives - the Swedish royal website says it's for those who the family meet while on their travels which narrows it down not in the slightest. The event was held at the Royal Palace and while the royal dresses were colourful, the tiaras were all about light.  Queen Silvia set the tone by choosing the Connaught tiara. This swirling set of diamond loops, brought to the Swedish Royal Family by Margaret of Connaught when she married future king Gustaf VI Adolf in 1905, is a pretty if delicate piece. It contains hundreds of sparkling diamonds arranged into wreaths of forget me nots but its intricate design can let it get lost against the light. No such problems for Silvia who gave it the full gala hair treatment and made sure its sparkle was there for all to see. 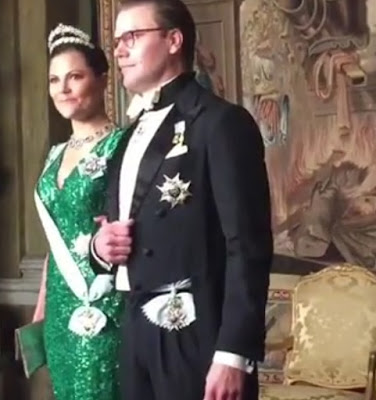 Crown Princess Victoria went for the Laurel Wreath tiara which was left to her by her aunt, Princess Lilian, in 2013. This two tier tiara is made up of diamonds shaped into, you've guessed it, laurel wreaths with a single diamond pendant suspended from the top layer. Although associated with Lilian, the diamonds began their royal journey with Queen Sophia of Sweden who gave them as a wedding present to Margaret of Connaught. Margaret's son, Bertil, inherited them and Princess Lilian started wearing this tiara just before their marriage in 1976. Victoria first wore the tiara at Princess Madeleine's wedding in June 2013, just three months after Lilian's death. 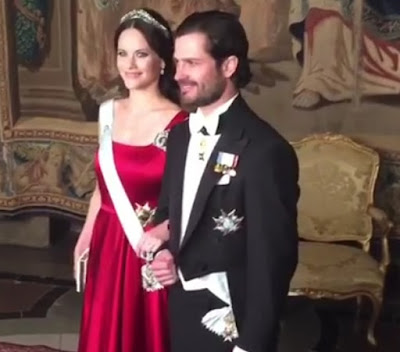 Princess Sofia had the smallest tiara of the lot but that didn't matter, we were all fascinated by her fabulous red frock and the baby bump that was making its debut. The princess had announced her second pregnancy earlier in the day and it's no wonder - the bump was ready to shout the news all on its own. Sofia looked great and added enough sparkle to her look with the Steel Cut Bandeau tiara which she chose for the 2016 Nobel Prize ceremony as well. This is one of those clever pieces that the Swedish royals love so much - a diadem with no diamonds. It's made of steel that's been cut and polished until it looks like a row of gemstones and it packs a real glitter punch. It's got a romantic history as well - it's thought this tiara came to Sweden with Josephine of Leuchtenberg, wife of King Oscar I, and a granddaughter of the Empress Josephine. It's seen a lot of royal events and its latest appearance was as the star turn on a night that Sweden's royals celebrated their future and the promise of a new prince or princess in September. A sparkling evening all round.