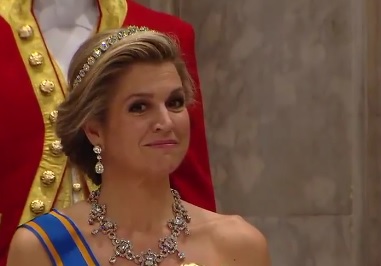 In a week that will be dominated by sparkle, tonight was a dazzler. There are two State Visits going on over the coming days and that means State Dinners. On March 28th, Queen Margrethe will host Philippe and Mathilde of the Belgians on their State Visit to Denmark but the tiara curtain raiser this week came courtesy of the Dutch Royal Family as they welcomed the President of Argentina and his wife to Amsterdam. President Mauricio Macri and Juliana Awada are making a two day State Visit to the Netherlands and as the first half came to an end, there was a gala evening with plenty of glitter. Maxima did diamonds, Beatrix did pearls and a truly shimmering royal week got under way. Here's part one of this week's State Dinner Sparklers.

Queen Maxima began this tiara-tastic seven days with a set of stones that will take some beating. The Dutch Diamond Bandeau Tiara does exactly what it says on the tin. It's a bandeau tiara, made entirely of diamonds and it's Dutch. But the simple name and simple nature of this diadem belie its true power. For these are no ordinary diamonds, as if such a thing even existed, These are huge, great big, in your face and then waving at you diamonds. They sit in a row of ever growing gorgeousness, a bold line of sparkling stones that wrap around the wearer's head and glitter every which way you look. As if that wasn't enough to make Maxima smile, her husband paid a glowing tribute to her in his speech, thanking Argentina for giving him ''the most precious of gifts, my wife, the Dutch Queen''. There are some things even diamonds can't top.
Embed from Getty Images
There might also be ever so slight a nod to her guest, Juliana Awada, in Maxima's choice as well. For the diamonds in this bandeau were first turned into a tiara by Maxima's husband's granny - yes, none other than Queen Juliana. She transformed jewels that first belonged to her own grandmother, Queen Emma, into a tiara over eighty years ago when she was still heir to her country's throne. And this piece's simplicity is its power - with no fancy settings or extra decorations, the diamonds in this diadem speak for themselves.
Embed from Getty Images
Princess Beatrix also chose a piece where the stones take centre stage. Beatrix wore a tiara made of seven pearls, some of which are said to have arrived in the royal jewel box in the 17th century (it's seen above in an archive photo). This diadem began life with Queen Wilhelmina (Beatrix's granny. there's a theme here somewhere) who had this piece created around 1900.  It's made up of a small diamond base with a simple row of diamond fleur de lys interspersed with the pearls. The diamonds are do discreet on this one that they really just add a layer of background sparkle to those pearls which are stand out and then some.
Embed from Getty Images
Both choices are fascinating in their simplicity. They are masterpieces of jewellery design with an understanding that the high quality gems involved don't need any help to wow. It's a sparkling evening to debut this week's diadem. Enjoy the glitter then take a breather - part two is less than 24 hours away.
You can see all the tiaras worn to State events on the special page here.