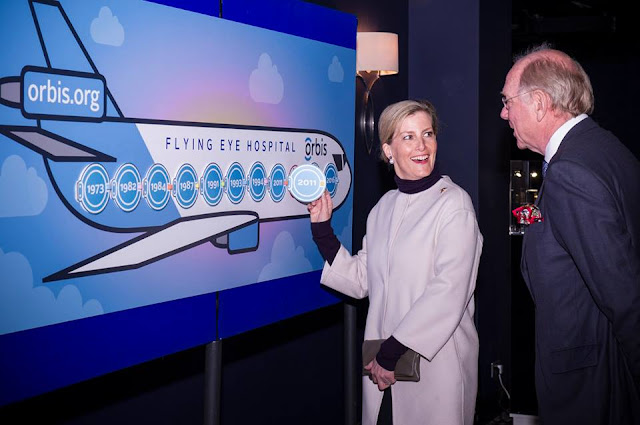 She's crept into the lead again. Sophie, Countess of Wessex topped this week's Royal Wardrobe poll in an outfit that barely made headlines when she wore it but which knocked everyone else out of the running in a head to head race. In the quest to find the outfit that best sums up royal dressing, the Countess of Wessex took on and took out looks that made front pages around the world. But then Sophie rarely gets the attention she deserves for her ongoing hard work. More of a spotlight on the Countess would be a good thing all round.

The outfit that topped this week's poll - ahead of Queen Letizia and the Duchess of Cambridge - is a case in point. Not only is it super chic, it was worn to an engagement at Stansted Airport where Sophie was touring the Orbis Eye Hospital. The Countess of Wessex was finding out more about the plane which heads off around the world to allow medical experts share their knowledge in eye care. She's long been involved in this kind of work but it rarely gets a mention - a shame when Sophie's dedication to duty does do much to promote good causes.

OK, back to the clothes. Sophie's style success came with a pair of navy trousers and matching top beneath a cream coat that let the sleeves do the talking. Add in navy shoes and a mushroom bag and you've got a bit of a masterclass in making colour blocking work. It's all rather appropriate while doing the whole chic and fashion forward thing while it's at it. No wonder it's a poll topper. Let's hope there's more of a focus on Sophie in weeks and months to come so that her work, as well as her style, gets the credit it deserves.