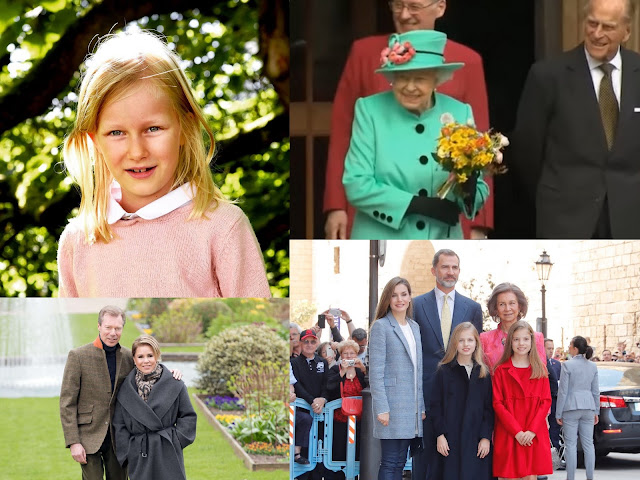 Easter brought a right royal treat. We got queens, princesses, duchesses and kings and all before lunchtime. Like a sweet little basket of treats that kept on giving, there were royals to be seen everywhere. This little regal fix should keep you going for at least a day.

Easter falls on April 16th this year which also happens to be one of those royal birthday bonanza days (the other biggie is in September but let's not get ahead of ourselves). Today saw celebrations for Grand Duke Henri of Luxembourg (62) and his youngest son, Sebastien (25) as well as Princess Eleonore of Belgium (9). But the big birthday, or the one with the biggest celebrations, was that of Queen Margrethe II of Denmark who turns 77 today. We got balconies. Well, a balcony. But it was ram packed with royals.


Queen Margrethe was joined by her husband, Prince Henrik, as well as her two sons, Crown Prince Frederik and Prince Joachim. We're not done yet. Of course, Crown Princess Mary and Princess Marie were there as were six of the Queen of Denmark's eight grandchildren (Prince Nikolai and Prince Felix were missing). Enjoy the slideshow above then steady yourself. There's much more to come.

Now we're off to Windsor. It's no surprise to see royals across Europe attending church on this important day and the Queen led her family to the service at St George's Chapel, Windsor. The Duke and Duchess of Cambridge attended - the first time they have celebrated Easter with the Queen here. We also got to see Edward, Sophie and their children as well as Beatrice and Eugenie and the Princess Royal. It was a very regal walk to church indeed and leads to a very packed slideshow above.