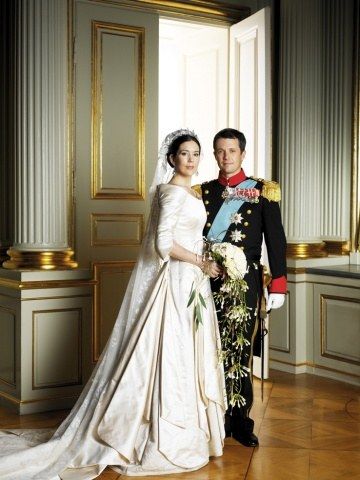 It's a wedding dress that can still start a healthy debate. When Mary Donaldson stepped out of the car taking her to her wedding on May 14th 2004, her ivory gown was an instant hit with many but for some its nod to history made it a bit too character filled to work.  It's always been a total favourite of mine and twelve years on, it hasn't really dated perhaps because of its vintage inspiration. Here's a look at the wedding dress Mary Elizabeth Donaldson wore to become Crown Princess of Denmark.

The Australian bride chose a Danish designer, Uffe Frank, to create her most famous gown and the result surprised just about everyone.  It looked as if it might have come straight out of an 18th century portrait with a few 21st twists added for good measure and it got everyone talking straight away. 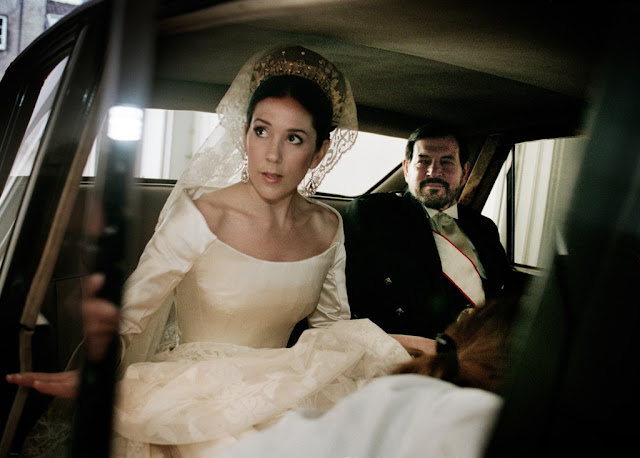 Mary Elizabeth Donaldson with her father, John, arrives for her wedding on May 14th 2004

The first glimpses of the dress, made of duchess satin, showed off the scoop neckline and closely fitted sleeves.  The bodice ended in a slim waistline that gave way to a full skirt.

The skirt was also made of ivory duchess satin with large pleats falling into panels that added another unusual look to this unique royal wedding gown. The skirt contained panels of lace handed down through the Danish royal family.  The Irish lace had originally been given to Crown Prince Frederik's great grandmother, Princess Margaret of Connaught, on her wedding.

All royal wedding dresses need a train and this one certainly had a train. It was a full six metres, or twenty feet, long and seemed to go on forever as the bride walked into Copenhagen Cathedral. It filled the aisle of the church and almost seemed too long for the dress - it certainly must have taken a bit of stamina for the bride to pull that around behind her for the ceremony.

It did detach and by the time Mary reached her reception. we got a better look at the draped effect on the back of the skirt which flowed into a little mini train behind her. With the train gone, there was also more chance to take in the back of the top of the dress, which sat neatly across the top of Mary's shoulders.

Her bouquet included eucalyptus to symbolise her Australian heritage and after her wedding it was taken to Scotland by an aunt and placed on the grave of her mother, Henrietta Donaldson, who died in 1997.  The Crown Princess' wedding dress contained one other, hidden special touch - her mother's wedding ring, sewn inside to lay close to her heart throughout the marriage ceremony.

The dress has been displayed several times since the wedding and still divides opinion now. 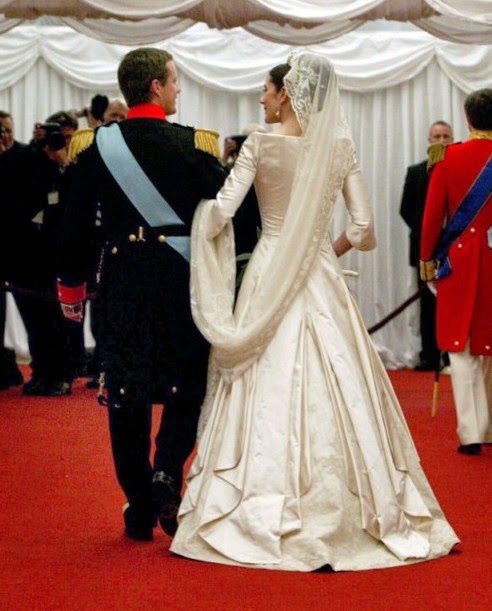 The Crown Prince and Princess of Denmark on their wedding day, May 14th 2004