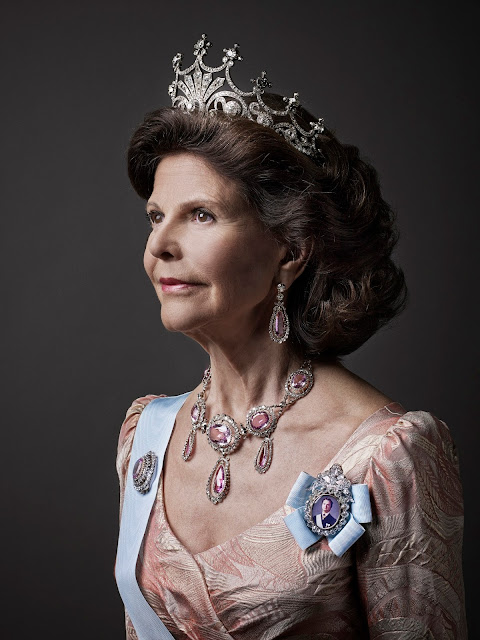 On the twelfth day of Christmas, my true love sent to me twelves cards for royal birthdays on ten separate dates with two heirs to the throne among them and a queen consort celebrating too. December is a busy month for royal birthdays so if you're in the mood for baking (non Christmas cakes) and blowing out (non festive) candles, the next four weeks will be a dream. Here are 12 royal birthdays for December.

Queen Silvia of Sweden is 73 on December 22nd
Silvia Renate Sommerlath was born in December 22nd 1943 in Heidelberg, Germany, the youngest child and only daughter of Walter and Alice Sommerlath. She grew up in Brazil and Germany. She met Carl Gustaf of Sweden, then heir to his country's throne, at the 1972 Munich Olympics where she was working as an educational host. He became King of Sweden in 1973 and the couple married in June 1976. The King and Queen of Sweden have three children and five grandchildren. Silvia is the longest reigning queen consort in Swedish history.

Princess Alexandra of Kent is 80 on December 25th
Alexandra Helen Elizabeth Olga Christabel of Kent was born on Christmas Day 1936 in London, the second child and only daughter of George and Marina, Duke and Duchess of Kent. The Royal Family needed something to celebrate - just two weeks earlier, Alexandra's paternal uncle, Edward VIII, had abdicated his throne to marry Wallis Simpson. Alexandra was educated at Heathfield School and in Paris. She has carried out royal engagements for over sixty years and the Queen recently held a celebration of her royal work at Buckingham Palace. Princess Alexanda of Kent married Angus Ogilvy in 1963 and was widowed in 2004. The couple had two children and four grandchildren.


Prince Lorenz of Belgium is 61 on December 16th
Lorenz Otto Carl Amadeus Thadeus Maria Pius Andreas Marcus d'Aviano of Austria-Este was born on December 16th 1955 in France, the second child of Robert, Archduke of Austria-Este and his wife, Margherita of Savoy. Lorenz is a grandson of Karl, last Emperor of Austria-Hungary. He studied economics at university in Switzerland and has worked in banking across Europe. He married Princess Astrid, only daughter of Albert and Paola of Belgium, in 1984 and the couple have five children as well as a granddaughter. Lorenz was made a Prince of Belgium in 1995 and became head of the House of Austria-Este on the death of his father in 1996.

Infanta Elena of Spain is 53 on December 20th
Elena Maria Isabel Dominica de Silos was born on December 20th 1963 in Madrid, the first child of Juan Carlos and Sofia who would go on to be King and Queen of Spain in 1975. Elena had a high profile as a member of the Spanish Royal Family and in 1995, her wedding to Jaime de Marichalar in Seville, was watched by millions of people. The couple had two children before divorcing. Since the accession of her brother as Felipe VI, Elena is no longer considered part of the official Spanish Royal Family.

Princess Sofia of Sweden is 32 on Decemebr 6th
Sofia Kristina Hellqvist was born on December 6th 1984 at Danderyd Hospital, Sweden, the daughter of Erik and Marie. She grew up in Stockholm and Alvdalen and became a model as well as starring on reality TV. Her relationship with Prince Carl Philip of Sweden was confirmed in 2010 and the couple announced their engagement in 2014. They married on June 13th 2015 and welcomed a son, Prince Alexander, on April 19th 2016 making this Sofia's first birthday as a mum.

Prince Joachim of Belgium is 25 on December 9th
Joachim Karl-Maria Nikolaus Isabelle Marcus d'Aviano was born on December 9th 1991 in Woluwe St-Lambert, the third child and second son of Princess Astrid of Belgium and her husband, Lorenz. He was born just months after his maternal grandfather became King Albert II of the Belgians. Lorenz was educated in Belgium, England and Italy.


The Princess of Orange is 13 on December 7th
Catharina-Amalia Beatrix Carmen Victoria, eldest child of Willem-Alexander and Maxima of the Netherlands, was born on December 7th 2003 in The Hague. Her birth, as a future queen of her country, was marked by gun salutes. She became heiress to the Dutch throne on April 30th 2013 on the accession of her father following the abdication of her grandmother, Beatrix. Amalia attends school near her family home in Wassenaar.

Prince Nicolas and Prince Aymeric of Belgium are 11 on December 13th
Nicolas Casimir Marie and Aymeric Auguste Marie, twin sons of Prince Laurent and Princess Claire of Belgium, were born on December 13th 2005 in Woluwe-St Lambert. Nicolas and Aymeric, fourteenth and fifteenth in line to the Belgian throne, attend school in Brussels and live with their parents and older sister, Princess Louise.


James, Viscount Severn is 9 on December 17th
James Alexander Philip Theo was born on December 17th 2007 at Frimley Park Hospital in Surrey, the second child and only son of the Earl and Countess of Wessex. He was christened in April 2008 in a replica of the famous Honiton lace gown used since the time of Queen Victoria. He lives with his parents, and older sister Louise, in Surrey.

Prince Jacques and Princess Gabriella of Monaco are 2 on December 10th
Jacques, Hereditary Prince of Monaco and Gabriella were born in Monaco on December 10th, the first children of Prince Albert II with his wife, Princess Charlene. Gabriella Therese Marie was born two minutes before Jacques Honore Rainier but succession laws meant that the baby prince became heir to the throne. They have had a high public profile since their births and they were recently seen during celebrations for Monaco's National Day.
at December 02, 2016
Email ThisBlogThis!Share to TwitterShare to FacebookShare to Pinterest
Labels: Belgian Royalty, British Royalty, Dutch Royalty, Monaco Royalty, Norwegian Royalty, Royal Birthdays, Spanish Royalty, Swedish Royalty