The Tiaras of Buckingham Palace (open here for diamonds) 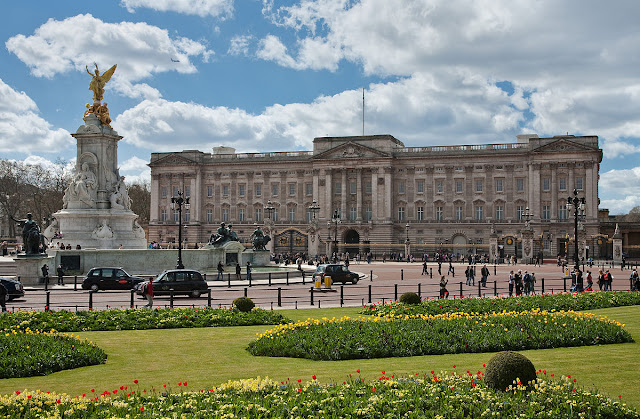 The annual diplomatic reception at Buckingham Palace in the early days of December usually involves some photos of royals heading into the HQ of the House of Windsor in the backs of cars, hopefully heads held high enough for us to catch a glimpse of the tiaras chosen for this year's do. In 2016, we got an official photo. Settle back and read on, this is diamond-tastic.

Before we even talk tiaras, let's do garters. Yep, the looks on the faces of the Duke of Edinburgh, the Prince of Wales and the Duke of Cambridge were perhaps enough to tell us that they are wearing rather fancy traditional outfits. Not really fair when the ladies of the House of Windsor get their pick from priceless gem stones and they get to wear clothes that not only look slightly uncomfortable but also faintly ridiculous.  Them's the breaks.  Tiara time.

The Queen and the Royal Family welcome the world's Ambassadors and High Commissioners from the UK's diplomatic community to Buckingham Palace for the annual Diplomatic Reception.
A photo posted by The Royal Family (@theroyalfamily) on Dec 8, 2016 at 1:03pm PST

Now don't get overly excited because there are no diadem debuts here. But there are three very lovely and historic tiaras, sparkling away in anticipation of Christmas. The Queen wore her Sapphire Tiara, last seen just over a month ago at the State Dinner for the President of Colombia. This was made for the Queen in 1963 from sapphires that once belonged to Princess Louise of Belgium. The Queen bought them to use in a tiara made to match the rather splendid set of sapphires, including the necklace worn to the reception, which were given to her by her father, George VI, for her marriage in 1947.


The Duchess of Cornwall also chose the same tiara worn for the Colombian State Banquet but when that diadem is a wall of diamonds that looks like you were made to wear it, who wouldn't try out this particular bit of royal recycling? Camilla was in the Greville tiara, made for Mrs Greville who had no family to pass it on to and so left it to the Queen Elizabeth, later Queen Mother, in her will. It's one up on candlesticks, that's for sure.


The Duchess of Cambridge chose perhaps her most famous tiara wear for another outing. When Kate first donned the Lover's Knot Tiara belonging to Queen Mary last year, it made huge headlines - partly because it was a new look for her and mostly because this was one of Diana, Princess of Wales' favourite tiaras. The pearl drops were back in action last night and looking rather classic.

This tiara, made in 1913 at Mary's request, was modelled on a Lover's Knot tiara belonging to Augusta, Duchess of Cambridge in the 19th century. Augusta was also Mary's granny meaning Prince William is her great, great, great, great grandson. Not only are there links to Diana but to a whole chapter of royal history. And a year on from its first wear, at the 2015 Diplomatic Reception, the debate about whether Kate should wear jewels so associated with Diana is gone. Like the famous sapphire engagement ring, it's become part of Kate's royal story as well.

Tonight The Queen and the Royal Family welcome the world's ambassadors to #BuckinghamPalace at the annual Diplomatic Reception pic.twitter.com/b2NEKEJBNj
— The Royal Family (@RoyalFamily) December 8, 2016


On a day when all the royal jewel talk started with a photo of Princess Eugenie sporting a ring on her engagement finger, the final word went to three royal tiaras that always have the power to stun. The official photo was a rather sparkling and unexpected treat - but will it be the last diamond packed surprise that the House of Windsor springs on us in December?