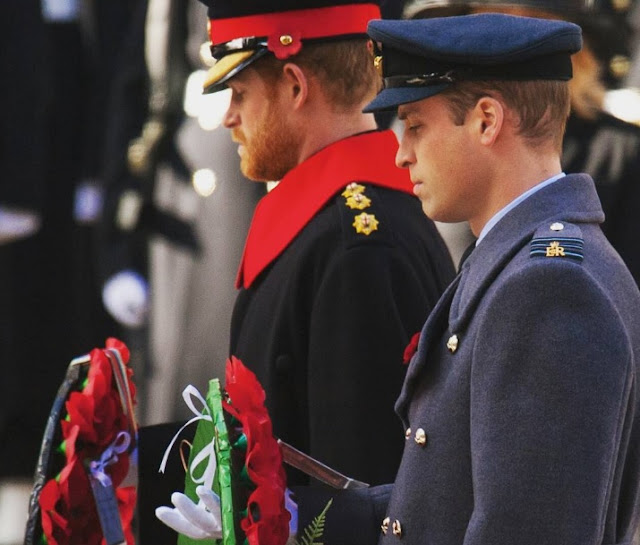 Social media is a way of royal families making a bigger input into their public profile but what makes an impact tells us just as much about what people think of royalty right now. The image led medium of Instagram allows ruling houses to share the photos they feel tells their story but the number of likes those pictures get tell us what is popular about the regal families of Europe right now. November's most liked Instagram images show that tradition still rules and the spectacle that comes with royalty is what wins hearts right now. Here are November's best liked Instagrams from official royal accounts.


The Duke of Cambridge and Prince Harry honour the fallen at the #RemembranceSunday service at the Cenotaph today.
A photo posted by Kensington Palace (@kensingtonroyal) on Nov 13, 2016 at 5:24am PST


The Duke of Cambridge and Prince Harry getting ready to lay their wreaths on Remembrance Sunday is the most popular Instagram image of the month with 53, 700 likes in just two weeks. It's a striking photo of two popular royals but the comments also show that the link to Diana is important to royal fans, even now.

The Queen and The Duke of Edinburgh attend the Royal British Legion's #FestivalofRemembrance at the Royal Albert Hall. ©PA images
A photo posted by The Royal Family (@theroyalfamily) on Nov 12, 2016 at 2:52pm PST


Remembrance Sunday also dominated the Royal Family Instagram account with the most liked photo there being one taken of the Queen at the Festival of Remembrance - the tally so far is 25, 800. It may be down to the emotion on the face of Elizabeth II or the link to Remembrance - the top five most liked images on the account this month included a field of poppies. But portraits of the Queen on the Royal Family Instagram are always hugely popular -  in November, the image of the new portrait by Colin Dabvidon got well over 20,000 likes as did an archive image of the Queen holding the roundel announcing the Elizabeth Line. Instagram's target audience is young but the longest reigning monarch in British history is still a huge draw there.

Bristen på fysisk aktivitet har blivit ett av världens största hälsoproblem, vilket var ämnet för Kronprinsessparets möte med professor Stephen Hawking i Cambridge tidigare i höstas. Mötet inspirerade professor Hawking till att engagera sig i frågan. Se resultatet @gen.pep The lack of physical activity has become one of the world’s greatest health problems. This was the topic during a meeting between the Crown Princess Couple and Professor Stephen Hawking in Cambridge earlier this autumn. The meeting inspired Professor Hawking to get involved in the subject. See the result @gen.pep #kungahuset #genpep #StephenHawking
A photo posted by Kungahuset (@kungahuset) on Nov 17, 2016 at 12:01am PST

The Swedish Royal Family's Instagram account was rather quiet at the start of November but that didn't stop this image of Crown Princess Victoria and Prince Daniel with Professor Stephen Hawking becoming the most liked photo on their channel in November.  The picture was taken at a meeting in Cambridge earlier this autumn and posted as part of a campaign to encourage better health through more physical activity. Again, it's a clear portrait of popular royals and add in a bit of celebrity, it's no wonder this one has scored so well with 11, 200 likes so far.

Royalty means glamour, it means ceremony, it means fairytales and that's clear from the most liked photo on the Danish Royal Family's fairly new Instagram account. This photo of the happy ever after of Crown Prince Frederik and Crown Prince Mary from 2004 isn't just a great photo. With the picture perfect bride and groom, the palatial settings, the hint of a cheering crowd below and a kiss to seal the deal, this is royal romance in a nutshell and it got 10,400 likes to prove it.

In an image led medium like Instagram, sometimes a great photo is just a great photo. But this picture of the Duchess of Cornwall with her all female bodygard team during her visit to the United Arab Emirates also got everyone talking. With Clarence House praising the other achievements of the women looking after Camilla in the notes that went with the post, this photo really caught the public imagination as a statement of modern royalty. It's got 8,700 likes so far.

There are times when just being royal is enough to get the hearts clicking on Instagram. The Belgian Royal Family has only had an account for a few months but within hours of this photo of King Philippe and Queen Mathilde surrounded by the Dutch royals at a State Banquet appeared, it went straight to the top of its liked list. Admittedly, that's a small number - it got 277 likes, just a fraction of the others. But then with just under 4,000 followers in these early days, the numbers are never going to be huge. And clearly a bit of ceremonial goes a very long way.

The Norwegian Royal Family's Instagram account is the newest of all, launching just weeks ago, and it aims to share photos not just of the household but of people they meet along the way. We're also getting behind the scenes at the palaces from this account and in November it was a glass jar with some leaves in it that got its followers excited. This image of the festive decorations being laid out in the Royal Palace as part of Advent preparations was the most liked image, with 242 hearts, despite only appearing with days of November left to go. Which just shows that tradition, even if it is a non royal one, will always win fans in the photo stakes.

This month's Instagram likes are mostly about the foundations of modern royalty - following tradition, the big ceremonies, the moments - like Christmas - that can be shared with the millions looking on. Of all the photos shared in November, it was being regal, following tradition and a bit of star dust that made the connection.