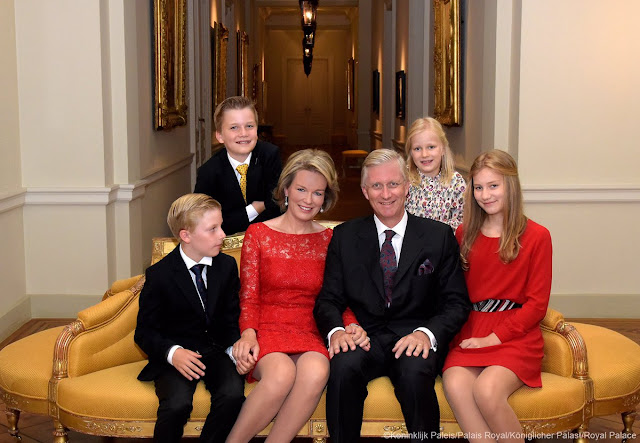 The royals are just like the rest of us really. Christmas Day is all about family, food and Facebook photos. That modern moment of festive celebration that is a picture on social media to mark the season extends to the ruling houses of Europe. Here are the images they shared to say Happy Christmas, starting with a rather elegant portrait of King Philippe and Queen Mathilde of the Belgians with their children posted on Twitter.

After starring in a set of super cute Christmas photos, Monaco's royal twins added a Facebook video to their festive celebrations as the big day approached. Mum and dad were there too with a multilingual Happy Christmas to round things off.

The Dutch Royal Family shared a photo on Facebook showing King Willem-Alexander and Queen Maxima with their three daughters taken in the summer.

The Danish Royal Family took to Instagram to share their festive photo with Queen Margrethe II and Prince Henrik posing with their eight grandchildren and a tree that could only belong to Denmark's monarch.

On Christmas Eve, the Norwegian Royal Family shared another image from their official festive photo album, choosing the snap where queen in waiting Ingrid waits on queen consort, and granny, Sonja, with a basket of seasonal treats.

King Felipe of Spain was the star of his royal household's social media share as an image of him from his Christmas Eve speech appeared on the official Twitter feed as the big day dawned.

Sweden's Royal Family took to Instagram to wish a Happy Christmas with quite possibly the least festive photo of the lot. OK, it's a rather smart portrait of King Carl XVI Gustaf but if the tree is in this one, it's very soft focus behind him.

🎄Wishing you all a very Merry Christmas from @clarencehouse!
A photo posted by Clarence House (@clarencehouse) on Dec 25, 2016 at 1:12am PST

There was no doubting the time of year in the photo shared on the official Clarence House Instagram account to mark the festive season. What could be more Christmassy that this rather stunning tree?

"I often draw strength from meeting ordinary people doing extraordinary things: volunteers, carers, community organisers and good neighbours; unsung heroes whose quiet dedication makes them special. They are an inspiration to those who know them" - The Queen.  Her Majesty reflects on 'Inspiration' in her annual Christmas broadcast to the Nation and Commonwealth, from Olympic and Paralympic athletes to unsung heroes in the community. You can watch the #QueensSpeech on The Royal Family's YouTube channel. Click link in bio.
A photo posted by The Royal Family (@theroyalfamily) on Dec 25, 2016 at 7:26am PST

The Queen stayed indoors this year on Christmas Day to help her recovery from a cold but she won the royal social media share fest for the festive season with an understated yet totally sparkling image of her from her annual speech. It's as much a part of the big day as the tree itself - that's how to do a 21st century royal Christmas greeting.
at December 26, 2016
Email ThisBlogThis!Share to TwitterShare to FacebookShare to Pinterest
Labels: Belgian Royalty, British Royalty, Danish Royalty, Dutch Royalty, Monaco Royalty, Norwegian Royalty, Royal Christmas 2016, Spanish Royalty, Swedish Royalty